Arte Continua Habana: how to run an international gallery in Cuba

Who would set up a gallery in a place where selling art is forbidden?

That it takes several days and as many failed calls to reach Lorenzo Fiaschi in Havana speaks volumes about the near folly of his decision, in 2015, to set up an outpost of his Tuscan gallery, Galleria Continua, in the Cuban capital. Yet two years later, Arte Continua Habana, housed in a dilapidated cinema, has hosted international stars such as Daniel Buren and Anish Kapoor and rising Cuban practitioners including José Yaque, Elizabet Cerviño and Susana Pilar.

Fiaschi, when I finally speak to him, is just days away from opening a show devoted to the thoughtful Chinese artist Chen Zhen, who died in 2000. “I’ve been looking for Plexiglas,” says Fiaschi blithely. “It’s hard to come by here.” It’s unlikely such problems will spoil the experience for the enthusiastic opening-night crowd. “People from all types of backgrounds come to our shows because Cubans are very curious about art and culture.”

Fiaschi has form when it comes to seeking pastures new. He set up the original gallery with friends Maurizio Rigillo and Mario Cristiani in 1990 in their hometown of San Gimignano, a postcard-perfect Renaissance citadel in Tuscany. Yet in 2005, the trio were among the first European dealers to bring non-Asian artists into China when they opened a gallery in Beijing. In 2007, they opened Les Moulins, which unspools former factories and mills in the countryside outside Paris.

Nevertheless, couldn’t the decision to open in Havana prove a branch too far? After all, even after the restoration of diplomatic relations with the US in 2014 after 50 years of sanctions, Cuba is still isolated. The embargo remains. President Trump is reinstating certain travel and trade restrictions lifted by Obama. Cuba’s media is muzzled. Widespread poverty is undeniable. Museum directors in Havana might take home $40 a month, Fiaschi tells me. Factory workers are lucky to take home half as much. It should be added, however, that the country rates surprisingly highly on the UN’s human development index.

“It’s about enthusiasm and emotion,” Fiaschi declares across our crackly telephone line. “We never reflected very much on whether or not it would work. More than anything it came about through our instinct of wanting to be in Havana.”

The project’s origins were sown in 2014 when Michelangelo Pistoletto, titan of the Arte Povera movement and a Galleria Continua artist, showed his piece “Terzo Paradiso” (“Third Paradise”) at the Biennale of Marrakesh. Among the audience was Laura Salas Redondo, a Cuban curator who perceived that the work — which reconfigures the infinity symbol to include a third element that stands for the reconciliation of opposing forces — resonated with the tricky rapport between Cuba and the US.

The following December, Pistoletto’s sign was mapped out by boats piloted by local fisherman in the sea off the coast of Havana. “It was December 16 2014,” remembers Fiaschi. “The day after ‘Terzo Paradiso’ happened, Obama announced the normalisation of relations with America. It felt like a sign that we had to be here!”

Their next venture, in collaboration with the Havana Biennale in May 2015, was the presentation of a site-specific work by French conceptualist Daniel Buren in the Aguila de Oro, a 1950s cinema theatre in Havana’s Chinatown district. Suggested to them by Jorge Fernandez Torres — then director of the Havana Biennale, now director of Havana’s National Museum of Fine Arts — the atmospheric space would become the gallery’s permanent home.

On November 27 2015, Arte Continua Habana inaugurated its first show. Entitled Anclados en el Territorio (Anchored in the Territory), it saw a collective of six Cuban artists, Alejandro Campins, Elizabet Cervino, Carlos Garaicoa, Susana Pilar, Reynier Leyva Novo and José Yaque, “seize the surroundings” and respond both to the old cinema and the history-cloaked district around it.

But in this communist country, can the dealer actually sell works from his Havana space? “No, it’s forbidden to make sales here,” replies Fiaschi. Instead, he explains, the gallery is a “cultural centre”. In other words, it is a non-profit space where he and his team make art displays, educational workshops and public projects in collaboration with Cuba’s ministry of culture.

So what are the benefits of the enterprise for the Tuscan trio? For Lorenzo, it is an opportunity to build deeper links with a country he fell in love with when he first discovered it, on a road trip, some 23 years ago.

“Cuba is a fantastic place. The people are really simpatica, even though life is difficult for them in material terms,” he explains. “They are also enormously educated. Whether artists or pharmacists, people here really care about culture. They are very proud of their country and their history of resistance to imperialism.”

Yet that independence comes at a heavy price. Journalists, academics and activists are imprisoned if they are considered a threat to the regime. Just two weeks after Pistoletto’s soothing intervention, Cuban-born, US-based artist Tania Bruguera was jailed for her plan to stage “Tatlin’s Whisper” (2008), a performance advocating free speech, in the Placa de la Revolucion, having been denied a permit by the Cuban government. How does Fiaschi square his conscience with this suppression of the imagination?

“Tania knew what she was getting into,” he retorts. “She had performed that work with authorisation at the Wifredo Lam Centre [a contemporary art space in Havana] and nothing had happened. To [try to] put it on in the Placa de la Revolucion without a permit was a provocation.”

He views his role, and that of his gallery, as “not to judge. [We don’t] deliberately put ourselves in conflict” with the government. His hope is, rather, to build bridges through communication and collaboration. After the success of his “Third Paradise” event, Pistoletto, for example, inaugurated his Rebirth Forum — which is now travelling the world — in Havana in 2015. Bringing together artists, teachers and government workers, the forum considered how art and politics might collaborate to reinforce the UN’s goals for sustainable development.

Fuelling Fiaschi’s passion is the enthusiasm of the artists. For the Cuban contingent, the opportunity offered by this rare showcase in a city is self-evident. Equally, the chance to travel beyond Cuba’s borders and exhibit in Europe is clearly valuable.

Yet for the international party too, Havana proves alluring. “Our idea was never to bring over artists’ work in crates ready to set up but to encourage them to build site-specific pieces,” explains Lorenzo. With its generous volumes, timeworn patina and romantic light, the ramshackle ex-cinema has sparked imaginations. “They all want to come,” says Lorenzo laughing.

Even the myriad everyday logistical glitches — such as the lack of Plexiglas — fail to dent the artists’ commitment. “In Havana, you succeed with what you’ve got,” says Fiaschi cheerfully.

At which point our shaky line falters into silence. When we finally reconnect there’s just time for him to tell me that actually sales in Tuscany have perked since the Havana initiative. “It was similar when we opened in Beijing. People didn’t buy there [although they could] but in San Gimignano, sales rose by 40 per cent. The international visibility [of these projects] brings its own reward.”

When I congratulate him on rising to to the challenge, I can hear his grin down the wire. “Nothing occurs by chance. It’s all about being open to new energies. If you don’t take a risk, nothing happens. It’s just like love!” 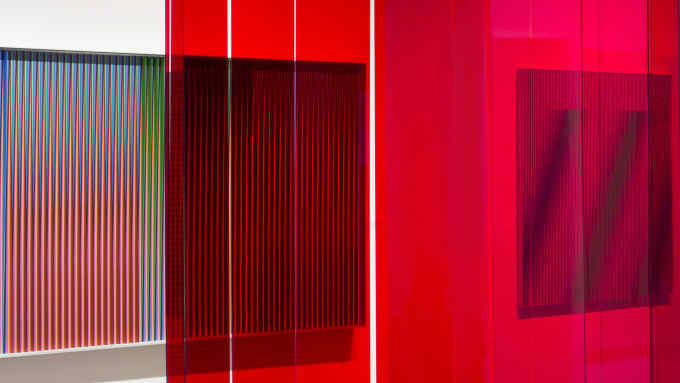