Valentino delivers the most beautiful show of the season

Did Pierpaolo Piccioli deliver the best show of the season? It was certainly the most beautiful.

We had hoped for as much. Piccioli enjoyed a rapturous response to his Valentino couture collection in July. The shapes, the silhouettes, the blousey billowing exuberance of it all was powerfully romantic. His colour-saturated silk taffetas made audiences swoon. Beyoncé wore his clementine puff of a gown on tour two weeks later. The rest of us could only dream.

In the past, Piccioli has kept his couture and his ready-to-wear distinct, seasoning the latter with trend-led prints and thematic flavours but keeping the couture collections pure. I have yearned to see more of that rigour, that emphasis on silhouette and colour, in the ready to wear. On Sunday he delivered just that: a stunning collection of wonderful clothes that had the same minimal simplicity of his most extravagant creations. They may not have been so pricey but they looked a million dollars.

Piccioli had been thinking about “escape” when he started this collection. He showed me images of Paul Gauguin in Tahiti and the upstate New York artists’ community of Maverick, which hosted an early prototype of the Woodstock festival. The usual stuff, to be honest. I was all ready for a spiel on creative sanctuaries and utopias, and the hunt for the exotic.

“But actually, I came to decide that this idea of escape is a bull shit,” said the Italian. “You should be free to be who you are wherever you are, not be running off to some community in the forest.” For Piccioli, true freedom is in the ability to communicate whatever you are, regardless of location. “Walking down the street. Living in the city.” He feels free in the couture atelier. And so he drew on the “grandeur of couture”.

The collection opened with 14 looks in black. They had an easy fluidity and breezy confidence. A dress, wrapped around the body in a fan of silk faille pleats, had a sophisticated volume. A second version, in jersey, had a limpid grace. Colour crept into the collection: a red jersey dress with a billowing cape sleeve effect, a “simple” white shirt with huge blouson sleeves, worn with a crease pleat trouser. A dress in rainbow stripes. A pleated leather skirt. They were flattering and wearable and wonderful.

Piccioli had worked with less expensive fabrics such as cotton poplin and jersey to create the extravagance here. He had also used different technical skills to find a less “finished” effect. A multicoloured dress was patched with velvet rather than woven into the fabric, intarsia-style. Things were left a little rustic. All were worn with simple leather sandals that would be customised with a feathery strap on the rear — like a feather fender. Personalisation is key to the couture sensibility. I almost preferred the slightly cruder approach.

It was a collection of utterly gorgeous clothes. I’m sure Piccioli is being made to focus on accessories and branding, which here came in belts and bags featuring big, brassy ’70s -style logos and hardware, but I didn’t much care for those kind of business-y details. In a week that has seen much discussion of the male gaze in fashion, and in the world at large, Piccioli’s vision of womanhood was one to restore one’s confidence in men. We all felt a bit more loved again.

Givenchy’s Clare Waight Keller has also been using the couture studio as a crucible for ideas. Like Demna Gvasalia at Balenciaga, she is “obsessed” with the shoulder. This season she had shifted the shoulder forward, to make it lie quite flat. This narrowed the silhouette and made it more masculine. It’s something she cooked up in the couture studio, became “insane about”, and has been using ever since.

Like Piccioli, she talks of the freedom of the couture atelier. For Waight Keller it’s become a “laboratory in which to open up new worlds”. Amen to that. In a world of design by curation, it’s a joy to find a designer who still strives to hone new skills.

In designing this SS19 collection, which combined men’s and women’s clothing, Waight Keller had been thinking about Annemarie Schwarzenbach, the Swiss-born photographer who was raised to be sexually liberated and was often mistaken for a man. A fascinating 20th-century character, Schwarzenbach had a morphine addiction, depression and suffered a ghastly head injury in a bicycle accident. She also had awesome style.

This, then, was another take on gender fluidity, albeit of a gentler nature, where masculine and feminine codes were combined, and tailoring mixed with flou. Waight Keller used her new tailoring to sharpen up the edges on long floaty dresses, and give them a tough attitude. It looked as sharp as a pin.

In a balance of looks that married day and eveningwear, she kept the body covered up. A top might have a cut-out detail, and there were deep V-necklines and some short skirts, but most of the women’s looks were sleeved, midi-length and long. And almost all were worn with black opaque tights.

The demure lengths and low heels were possibly a nod to Waight Keller’s other current duty — as dressmaker to the Duchess of Sussex, for whom she designed a wedding gown this year. Waight Keller has also made several of the outfits the Duchess has worn in public since, and I wonder if the careful code of modesty the Duchess must observe has had some influence on the collection here? Likewise with the eveningwear, which was long, gently fitted and unprovocative. Very Royal Gala-ready. I’m looking forward to seeing which pieces Meghan will wear. And hoping she goes for the suits. 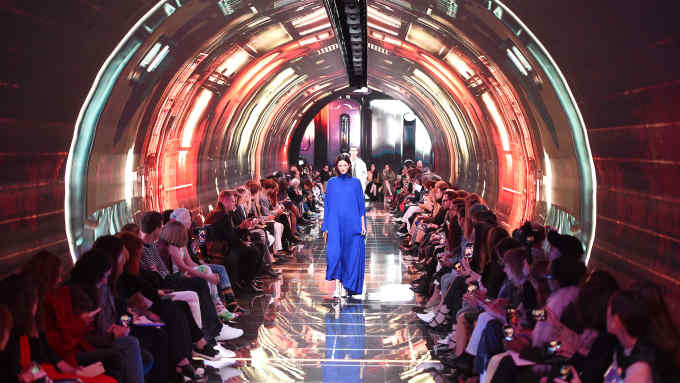