Individual claims may be small, but their impact is sizeable when combined

As soon as authorities around the world forced millions of small businesses to shut down amid the Covid-19 pandemic, an avalanche of litigation was likely to follow. Company bosses — from hair salons and dentists to builders — all turned to their insurers to cover the impact on their operations, and help them stay afloat.

But would the insurers pay out? And would the potential number of lawsuits needed to determine liability become overwhelming?

In the UK, the Financial Conduct Authority, the financial regulator, and eight insurers, quickly took steps to bring a landmark court case in which they asked judges to determine whether payouts on business interruption policies were due.

The case and its eventual outcome have been closely watched around the world, wherever insurers and small companies are locked in stand-offs over the same issue.

Mrs Justice Sara Cockerill, the judge in charge of London’s commercial court, recently told a conference, the 2021 Dispute Resolution Forum, that the lawsuit was “effectively an international lead case” and a “shining example” of procedural effectiveness. At least one other jurisdiction was staying its own cases pending the outcome of the FCA case, she said.

The lawsuit was the first case brought under the Financial Markets Test Case Scheme, which allows urgent judicial interpretations of key questions affecting financial markets. The case went all the way to the UK’s Supreme Court, which ruled in January 2021 that, in most cases, insurers must pay up.

“I am sure it has saved a lot of litigation,” says Paul Lewis, a London-based partner at law firm Herbert Smith Freehills, who advised the FCA in the case. “Many small enterprises affected by the pandemic might be the ones who could not afford to spend tens of thousands of pounds on litigation,” he points out.

For law firms, the work involved a compressed timetable and weekend working. Lewis and his team were instructed by the FCA in May and the lawsuit was issued in June. The FCA estimated that 700 types of policy held by 370,000 policyholders across 60 insurers could be affected by the case. 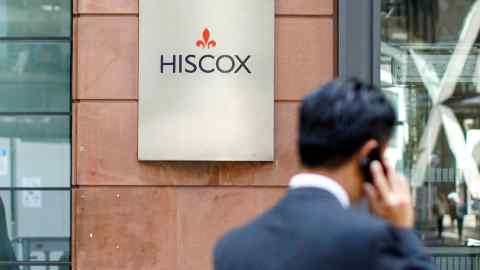 The High Court considered the case in July 2020 with an appeal by the losing insurance companies heard by the Supreme Court in November and a final ruling handed down in January 2021. The UK’s highest court found that most types of insurance policies held by the small firms should pay compensation. So far, around £1bn has been paid out by insurers.

Lewis says the speed of the lawsuit and the legal questions were novel. The lawyers also had to select 21 sample insurance policy wordings and the FCA had to argue that previous case law on the topic had been wrongly decided.

Business interruption insurance would normally kick in where there was damage to property such as a flood, Lewis explains. However, “in this case, it was all about assessing business interruption cover absent property damage,” he notes. “I’ve been doing this for nearly 30 years and it was the first time I had cause to look at these extensions to cover. And, of course, there was no real precedent for mass business shutdowns.” That the case was heard at all is significant, because test cases so rarely take place in the UK, he adds.

Equally remarkably, he says: “I never met our counsel team — we all worked remotely and did our case management hearings and trials remotely, which was completely different.”

The FCA case shows that UK government regulators are prepared to intervene with a test case if it will help determine an issue affecting thousands of businesses that otherwise could not afford access to justice. The cost of bringing litigation is prohibitive for small companies, especially if they can only win relatively low levels of compensation.

But this is starting to change thanks to greater use of collective legal actions that help consumers and small businesses bring court cases. While individual claims might be small, their numbers are sizeable when combined.

Cases brought under the 2015 Consumer Rights Act representing multiple claimants are increasingly being financed by the litigation funding market, when funders back lawsuits in return for a slice of any compensation.

Law firms such as Hausfeld — which has offices in the US, Germany, Netherlands, UK, France and Sweden — are in the vanguard of those bringing such cases and finding new ways for clients to access justice.

Hausfeld is currently engaged in truck cartel litigation, which is progressing through the courts in Germany, the Netherlands and the UK. The firm’s teams have brought claims stemming from a dispute totalling €5bn and covering 500,000 trucks and 10,000 affected small companies. The actions, brought as individual and group claims, are supported by the transport associations of eight European countries.

The European Commission determined in July 2016 that five leading European truckmakers had co-ordinated the pricing of trucks from 1997 to 2011 and colluded on timing the introduction of emission technologies.

The Hausfeld lawsuit means a business that bought trucks affected by the cartel can claim compensation for any loss suffered from resulting higher prices, plus interest. The lawsuits were filed after a commission settlement decision against Daimler, Volvo, MAN, Iveco and DAF in which it found the companies co-ordinated the pricing of trucks between 1997 and 2011, leading to a €3.5bn fine.

The aim is to use and rely on the EC’s findings to bring this follow-on civil lawsuit for compensation. “One of the key arguments for bringing cases like this is that it helps facilitate access to justice,” says Lucy Rigby, partner at Hausfeld. “Claims are often expensive, time consuming and costly to bring and many of the truck firms are small businesses or family firms, which might not be able to contemplate litigation in many cases.”