The new wave in French fashion

There’s something new happening in Paris. Well, actually, it’s something old in that it’s to do with fashion, of which the city is always the undisputed, unassailable capital (you can thank Louis XIV for that). Names that you perhaps recognise – Alaïa, Courrèges, Mugler, Patou, Schiaparelli – or at least that resonate somewhere in the deep cultural echo-chamber of the brain, are being reinvented. Fresh blood in old houses.

Paris is a city obsessed with history, where you can’t walk into a Starbucks without a glassed-in bit of 18th-century boiserie. And in modern fashion terms, it’s well versed in reinvigorating existing heritage; this happened first in 1983, when the late Karl Lagerfeld audaciously revived the house of Chanel. But the mood of this current reinvention feels different. These five names – Pieter Mulier at Alaïa, Nicolas Di Felice at Courrèges, Casey Cadwallader at Mugler, Guillaume Henry at Patou and Daniel Roseberry at Schiaparelli – are grabbing attention with very different approaches. Combined, however, they add up to something like a new Parisian style template – and it’s a million miles away from the classic tropes of old.

There isn’t an aesthetic thread connecting this bunch of fashion houses, nor their designers: you can’t reconcile the coquettish taffeta and ruffles of the new Patou with the sharp ’60s-tinged minimalism of Courrèges, nor those with the body-conscious sexuality of Mugler. But there is a similarity in situation and approach. All have come to prominence, largely, over the pandemic – some installed before, some, like Mulier (appointed in February 2021) and Di Felice (September 2020), working entirely during the Covid-19 restrictions. Their clothes have had to communicate differently to attract fans and customers without the traditional mechanics of the fashion industry.

Casey Cadwallader, the 42-year-old New Hampshire-born creative director of Mugler since 2017, has seen phenomenal success with his intricately engineered clothing, in particular bodysuits with panels of opaque and sheer mesh, as worn by Beyoncé on the cover of British Vogue, and pretty much every other pop star of note. He draws from the house’s founder, Manfred Thierry Mugler, who died in January and found fame in the ’80s and ’90s with his racy designs that combined futurism with old-world glamour, and his bestselling fragrance Angel (1992). The Mugler signature is now more accessible, reflected in panelled denim jeans (which Cadwallader himself wears), or a new collaboration with Jimmy Choo including twisty, thigh-tugged boots that are a cross between hosiery and high heels. “I think at the moment we’re craving something that is very, very individual,” Cadwallader says, succinctly elucidating the unique appeal of each of these labels. “Each house really has to focus on what it does differently and get out of the grey zone because there are so many brands, so much Instagram, you really need to crystallise what it is that your brand does.” He pauses. “And do it better than anybody else.”

Individuality also extends to Cadwallader’s casting and, latterly, the films that he’s used to unveil his collections – using models with genders across the binary, including actors Hunter Schafer (Euphoria) and Dominique Jackson (Pose). “For me, the exploration of what sexy is today is really at the crux of my work,” he says. “I think that Mugler has always been synonymous with sex and the body and projecting a certain image. Historic Mugler represented the culture it was born within, which was a time where it was all about a woman seducing a man… Now, it’s about a woman’s own sense of self and empowerment. The definition of sexy is much more open and dynamic than it maybe was in the ’90s. You don’t need to be a certain age or a certain height or a certain build.”

Courrèges, which was founded in 1961 by husband and wife André and Coqueline Courrèges, fell off the fashion map in the early ’80s, and in recent years has been fitfully sputtering to try to gain some traction once again. If the name isn’t familiar, you will know the look: in 1964, Courrèges pioneered “Space Age” fashion, much ripped off then and ever since.

The task of 38-year-old Di Felice has been to reinvent a 1960s look (vintage pieces of which are still sported by enthusiasts today) that many could see as an albatross. “I don’t feel restricted,” he counters. Before arriving at the house, Di Felice was womenswear senior designer under Nicolas Ghesquière at Louis Vuitton, and before that Balenciaga (coincidentally, Courrèges was a tailor to that label’s formidable founder, Cristóbal). His second catwalk show back in September – shown en plein air on a giant white square plonked in the middle of the Bois de Vincennes – featured the label’s signature slithery PVC and lots of miniskirts, alongside criss-cross wrapped tops and exposed flesh. “That was hot,” drawled a New York stylist to me as we left the space. “Those girls – Gigi, Bella – they’re not gonna care about the history. They’ll just love that stuff.”

These labels are not like Chanel or Dior, where just the name can semaphore a look, a history and a philosophy (or, at least, a logo and a handbag). Patou, in particular, is a label whose identity is hard to pin down. It was founded in 1914 by Jean Patou, whose sportswear pieces were a major competitor to Gabrielle Chanel in the 1920s, but he died in 1936 aged just 55. Patou has gone through a revolving door of designers since, including Christian Lacroix, who reinvented the house in the ’80s, proposing his postmodern mish-mash of references, rich colour, bustles, bows and generally giddy silliness that was manna to the wardrobe of socialites such as Blaine Trump and Gloria von Thurn und Taxis. It was also haute couture, produced in tiny numbers and visibly expensive, that was perfect for its time.

Henry, the only Frenchman among this new roster of designers, was chosen by Sidney Toledano to helm the now LVMH-owned Patou in 2018. He has looked to revive the house with his own memories of that ’80s heyday combined with the spirit of Jean Patou’s sportswear; instead of a couture ballgown, you have a sweatshirt and a bubbly pouf skirt, or a T-shirt with a gargantuan lace collar that looks as if it came from a Van Dyck portrait but can be buttoned off and bunged in the washing machine. “It’s also very nice to not be traumatised by the archives,” says Henry, who shrugs off the challenge of trying to revive a brand that many thought consigned to history long ago. “I’m really into fairytales – so it’s like we’re bringing life to a Sleeping Beauty,” says the 43-year-old with a smile.

As Henry observes, archive clothes from these houses are very much being exhumed, revived and reworn by a new generation of consumers. There has been a healthy trade in Courrèges since the early ’90s, an era whose styles were influenced by retro and, in a typical case of fashion’s always short-term memory, are being revived themselves right now. Vintage Alaïa pieces fetch phenomenal figures at resale – especially his intricate intarsia knits of leopard spots and butterflies, and anything worn by supermodels, whose careers Azzedine Alaïa helped to craft as lovingly as his clothes. Creative director Pieter Mulier is buying vintage Alaïa for his own reference too. And, on the flip side, Mugler is happy to lend its archive – the rapper Cardi B has sported a number of one-offs.

An original piece by Elsa Schiaparelli, who founded her house in Paris in 1927 and was a rival to Coco Chanel, can now fetch hundreds of thousands of dollars. The house’s modern revival, led by Daniel Roseberry, is perhaps more wearable. His surrealist designs, which draw on Schiaparelli’s original mission, have found favour on the red carpet, worn by Beyoncé and Emma Corrin, and by Lady Gaga to sing the national anthem at President Biden’s inauguration ceremony.

These houses are connected by geography rather than ideology: ask any of the designers about Parisian style and you don’t get visual references – no beret and no Catherine Deneuve. “The younger generation, maybe, have never heard about her,” says Henry, a phrase that would’ve been considered Bastille-worthy a few years ago. “I love to share things with my team because they’re mostly younger than me,” he continues. “And the way they see fashion is something different. It’s more connected to the idea of attitude and community.” Cadwallader agrees: “The way that fashion feels in Paris is a total frame of mind.” And even though his Mugler is extreme – in fact, all these houses are offering pretty extreme aesthetics – there’s an idea of it being able to be broken down, pulled apart and integrated into everyone’s wardrobe.

“I took over a brand that’s really Parisian, but I think Parisian style is more about the way they wear things,” adds Di Felice. “Today, there are fewer questions about if this is womenswear or menswear. It’s just about what you want to wear. And André Courrèges was obsessed, even more than walking on the moon, with dressing people on the street.” 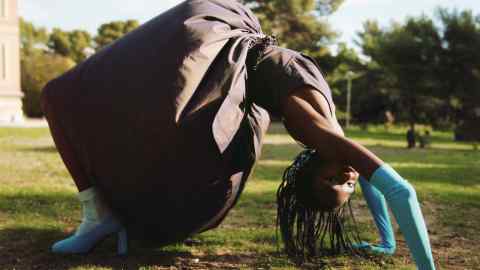 More than anything, these designers are dressing people who will likely wear their pieces mixed with vintage, with other designers, with sneakers and with jeans. Even if their clothes are sometimes extreme, what connects them is a sense of practicality. “To make a house live again, there’s no better option than to make clothes that people will wear,” says Di Felice pragmatically. And then he goes back to work, to do just that. 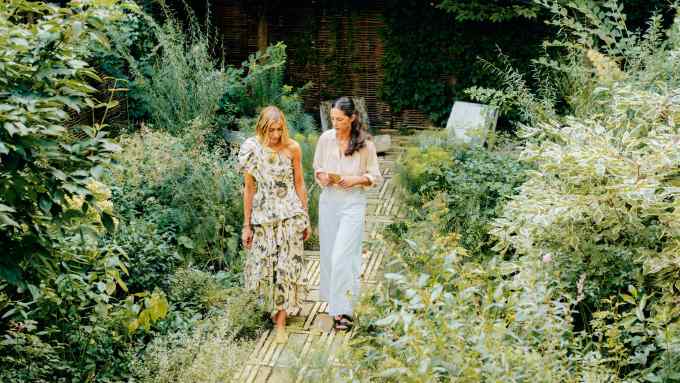