On land, sea and air, proponents of fuel cells are promoting their favoured zero-carbon energy source.

Cars and commercial vehicles, boats and aircraft are today generating propulsive power by passing hydrogen through electrochemical cells to generate electricity — with nothing but clean water vapour emerging from the process. Meanwhile, stationary fuel cells are providing off-grid and back-up power in remote locations.

The underlying technology is Victorian, dating back to an invention by William Grove in 1838, and its first significant application was by Nasa to power spacecraft in the 1960s. But it is only now, after a few false starts in recent decades, that the commercial market for fuel cells is finally beginning to take off. Analysts report that it is growing at an annual rate of 25 per cent, with projected sales of $20bn or more within five years.

As a technology driven primarily by the demand for clean power, fuel cells face two main competitors: burning hydrogen directly in a combustion engine, and drawing electricity from a rechargeable battery. A fuel cell is essentially a battery charged by pumping in a reactant which then flows through the cell; a conventional battery, by contrast, is sealed and charged by reversing the electrochemical reaction.

“In the future, we will have a blend of options — combustion, fuel cells and batteries,” says Celia Greaves, chief executive of the UK Hydrogen and Fuel Cell Association. “Each will have its advantages and disadvantages in particular applications.”

Road vehicles are a big potential market for fuel cells, though they face occasional taunts from Elon Musk, who has a huge vested interest in batteries and has famously called fuel cells “fool cells” and “mind-bogglingly stupid”.

Fuel cell advocates concede that, in the passenger car market, they cannot realistically catch up with the gigantic installed base of battery powered vehicles and the charging infrastructure being built to service them.

But some auto companies still persevere, notably Toyota, whose 2022 Mirai — the outcome of almost three decades of research and development — “is as close to the ultimate eco-car as you can get”, Greaves says.

The downside, she concedes, is a price around £50,000 for a midsized car, fewer refuelling options and, at present, higher running costs than a comparable battery electric car.

Some fuel cell companies see more mileage for their products in larger commercial vehicles. Volvo Trucks, for instance, is test-driving lorries powered by fuel cells made by Cellcentric, a joint venture between Volvo and Daimler Trucks based in Germany.

They will have an operational range up to 1,000km — similar to many diesel trucks — and a refuelling time below 15 minutes, though they will not be commercially available until later in the decade. “Fuel cell trucks will be an important complement for longer and heavier transports in a few years from now,” predicts Roger Alm, president of Volvo Trucks.

Boats are another tempting market. Maritime Partners, a large US-based ship owner, plans next year to launch a towboat (designed to push barges on inland waterways) driven by a fuel cell made by PowerCell of Sweden. Toshiba of Japan is also working to develop a hydrogen fuel cell for ships with another Swedish company, Echandia, which specialises in marine power systems.

But the most exciting long-term applications of fuel cells may be in the skies. Aerospace companies around the world are working on parallel development projects to burn hydrogen in modified jet engines and to use the gas in fuel cells.

An example is GKN Aerospace of the UK, which is in two zero-emissions consortiums.

One, called H2Jet and based in Sweden, is developing hydrogen combustion engines for mid-range aircraft that might be operational in 2035.

The other, larger partnership, H2Gear, is based in the UK and focusing on fuel cells for smaller subregional aircraft, which might be flying in the early 2030s. The hydrogen would be stored cryogenically as an ultra-cold liquid below -253C, rather than the high-pressure gas favoured for terrestrial applications.

Russ Dunn, GKN Aerospace’s chief technology officer, sees more scope for improving the performance of fuel cells than for batteries, “where a huge amount of work has been done already. In aviation, there is much higher value in a 1 per cent increase in fuel cell efficiency than for land transport.”

Looking globally, Dunn puts Germany at the front of the field, though Nasa and Boeing in the US have the most experience in fuel cells for aviation. With much pre-competitive work still to be done, fuel cell research and development is “really collaborative at the moment,” he says. 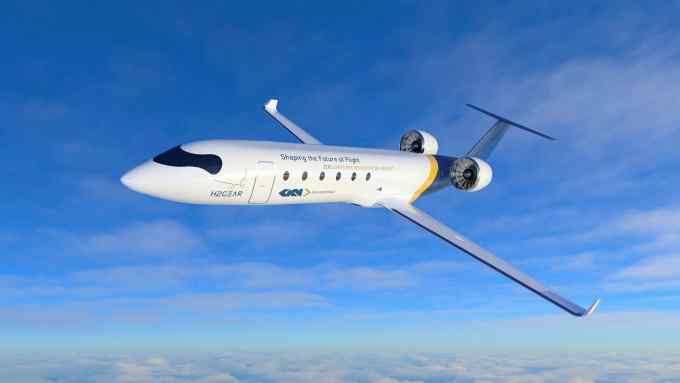