Why investors are looking beyond headline GDP data

The writer is chief economist at Credit Suisse

The pandemic has accelerated the trend among investors towards using alternatives to national accounts data in measuring macroeconomic performance.

Body temperatures, foot traffic, internet trends and stimulus cheque arrivals represent a small sample of the data that have been critical in assessing real-time economic activity. These measures have told a more precise story of the 2020 economy than national account measures such as gross domestic product or inflation.

The limitations of national accounts data has been a hot topic in recent years, even though it has long been known that they involve serious measurement problems and are only crudely related to concepts such as living standards and the cost of living. The pandemic might mark the point at which the prestige and influence of GDP-based measures in public discourse have finally peaked.

It is worth considering measurement and misuse issues separately. The headline national accounts figure — nominal GDP — is a useful, clearly defined and well-measured statistic. However, there is much that it does not cover, including at-home production and free goods that comprise many now-ubiquitous internet services. Nominal GDP equals real GDP plus inflation, and it is in this apportioning into parts where serious problems mount.

Basically, if inflation is wrong, real growth is too. In the 1990s, the Boskin Commission found that US inflation was upwardly biased, suggesting that real GDP was growing faster than the official numbers showed. In a 1996 meeting of the US Federal Reserve policy committee, Alan Greenspan said that “price stability” meant to him 0 per cent inflation, while his colleague Janet Yellen suggested that, given known mismeasurement issues, 2 per cent was a better target.

Since then, growth in nominal GDP, real GDP, working-age population, business investment, and prices have weakened versus older trends in the US and many other economies.

But while the decline in nominal GDP reflects a true, measurable decline, our certitude on the change in measures lower in the national accounts hierarchy is less. The large revisions that have occurred for national accounts-based US consumer inflation further underscore the tenuousness of our real-time inflation knowledge.

Video: World markets: five things investors are worrying about in 2021

To rectify the problems with these measures, there are efforts on alternatives such as disease-based price indexes, happiness measures, the “billion prices” project to track data from retailers around the world on a daily basis, and activity trackers sourced from satellites. There are also attempts to “correct” the traditional measures with ad hoc adjustments or by switching emphases toward less well-known variants.

The possibility of mismeasurement in national accounts is well known but the misuse of those data is more consequential. By “misuse” we mean the casual assertion that these statistics represent everyday concepts of living standards and the cost of living. This error is clearest when we examine long-term GDP estimates, and ask whether it is plausible that living standards were changing in the steady, linear way that long-term real per capita GDP charts suggest.

According to historian Jürgen Osterhammel: “That an ever-increasing share of all work came to be performed indoors was a great novelty of the 19th century.” 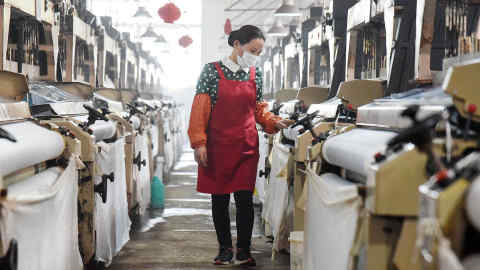 Similarly, we sometimes encounter claims of jumping real wages and even “rising living standards” after the 14th-century plague. Historical accounts of life after 1348 in western Europe do not, however, paint such a rosy picture of life in that period. Last year’s GDP data will hardly inform future generations about economic life in 2020.

For example, should additional fiscal stimulus measures target overall GDP or should it target households or businesses that are suffering most for no fault of their own?

The broadening use of contemporary “narrow” data is offering rich perspectives of economic life. Alternative indicators have enabled excellent real-time analysis during the pandemic. This has helped to guide policy decisions and minimise the macroeconomic damage.