“I’ve never owned a pair of jeans, and I’ve never drunk a Coca-Cola,” says Gene Sherman. “People ask me, What are your comfortable clothes? Well, Miyake is comfortable. He liked to say that he didn’t design for high-maintenance women.”

Sherman should know. She doesn’t just live in Issey Miyake — she’s wearing it as we speak and in the FT’s portrait — but has also collected clothing by the celebrated Japanese designer for years, along with a lesser showing of his compatriots Comme des Garçons and Yohji Yamamoto. She believes that thousands of years of Japanese thought flow through his work. “My ‘wearing wardrobe’ used to be 32 garments, now it’s gone up to 55,” she says. The rest is carefully cleaned, wrapped in acid-free paper, boxed and archived. Over the years, sections of the collection have been gifted to museums, not least the Powerhouse (or the Museum of Applied Arts and Science) in Sydney, where she sat on the board from 1993 to 2000.

While not high-maintenance in the hair and make-up sense, Sherman is a powerful figure in Sydney’s cultural life. She is one of Australia’s most assiduous collectors, philanthropists and art-world activists. Her collecting ranges across contemporary art, clothing, jewellery and, more recently, furniture. “I didn’t see that as a collection until we moved into the new house,” she says, referring to her home, Braelin, more like a campus of five discrete buildings on Sydney’s Centennial Park. They include a house built for the lord mayor in 1918. “It’s not grand,” she says, “but for Sydney it’s historic.”

Among its contents are a Shigeru Ban chair with a seat made of paper tubes and Mario Bellini’s modular Camaleonda sofas. In the dining area hangs part of a nine-piece suite of photo-media images by the Chinese artist Zhang Huan, called Family Tree, in which the artist’s face is increasingly covered in calligraphy detailing his identity. (Another edition is at the Metropolitan Museum of Art in New York.) She saw the work in 2004, at an exhibition in Sydney’s Museum of Contemporary Art. “And Brian said, Should we buy the whole show?” says Sherman about her husband, with whom she formed the collection.

Sherman’s acquisition of Japanese fashion has necessitated 58 visits to the country — “I’m part of the furniture there. I know many more people in Tokyo than in London” — and she was meant to make a 59th on September 12. But the day before, her husband of 54 years died. It was not sudden — Brian had been ill with Parkinson’s disease for 10 years, and even detailed the experience in a book called Walking Through Honey — but it marked the awful end of a long and devoted partnership. “He still looked so handsome, even on his deathbed,” says Sherman, who insists that work is providing the solace she needs.

Brian and Gene Sherman came to Sydney in 1976 from South Africa, with little money but desperate to escape the apartheid regime. Gene completed her doctorate in 20th-century French literature; Brian established a fund management company with Gene’s cousin, Laurence Freedman. (They sold it in 2000 for A$153mn [today US$100mn].) “I thought I’d be an academic,” she says. “But during that period Australia turned to Asia for its fortunes, and that impacted European language departments at universities.”

She taught in the language department at the exclusive girls’ school Ascham for five years until soon after her father died in 1985. “He’d always said two things to me: that girls could do anything, and that the next century would be the Asian century.” A Jewish immigrant to South Africa from Austria (her mother came from Lithuania), he had instilled a deep sense of discipline in his daughter. “I’d been establishing goals since I was six,” she says. “We are a strategic family.” She realised that visual art was her other love, gave up education and went to work in a private art gallery. By 1988 she had put her name above the door.

Sherman showed Australian, then Asian, then international artists. And after 20 years, she closed the gallery. “I wanted to stop selling,” she says now. “To get rid of the collectors. Wealthy people can be very difficult.” She established a private foundation — the Sherman Contemporary Art Foundation (SCAF) — with a budget of A$1.5mn a year, to focus on artists and public engagement. It launched in 2008 with a show by Ai Weiwei and new works were commissioned from artists including Janet Laurence and Yang Fudong and designers such as Tokujin Yoshioka. “SCAF went back to my academic roots, to teach, to explain,” she says.

After 10 years, at the age of 70, Sherman — who is never afraid to advertise her proprietorship — set up the Sherman Centre for Cultural Ideas (SCCI) to focus more intently on the cultural importance of fashion and architecture. With its tiny staff of four, Sherman calls it “an exaggeration of my journey through the arts. I am a researcher, collector, documenter by temperament and training.”

Sherman is bringing SCCI, a five-year project, to a close with something of a grand denouement by bringing it to London, with two long weekends of talks and exhibitions on fashion and architecture at the Design Museum in Kensington (October 28-30 and November 4-6 respectively). She sees it in part as a way of letting Britons know what Australia’s creative class is actually up to.

Sherman is bringing 40 speakers, from the futurist “body architect” Lucy McRae and Ninotschka Titchkosky, a designer of the world’s tallest timber skyscraper, to fashion designers such as Grace Lillian Lee and artists including Atong Atem. “Forty per cent of Sydneysiders have parents born outside of Australia, and the participants reflect that,” says Sherman. Attendees will be nourished with cucumber sandwiches and punch. Her book The Spoken Object, which details her collecting of fashion, jewellery and design, will be launched at the South Kensington art hub Cromwell Place, along with an exhibition of fashion.

Meanwhile, Sherman has been steadily divesting herself of her collections. “I’ve got a film-maker son and a daughter doing a sociology postgrad in compassion who lives in Tel Aviv. What were they going to do with 900 artworks?” she says. In May this year, a group of 100 works of contemporary art were sold in an online auction by Bonhams, and Sherman is busily gifting others to museums and placing them carefully in private collections.

The 300 works that she will keep include one of her recent purchases: a dark William Kentridge print from 1989 called “Casspirs Full of Love” which evokes the South Africans of that period detained without trial. And once that is all done, have no fear that Sherman will be unoccupied: “I’m going to write my memoirs,” she says. 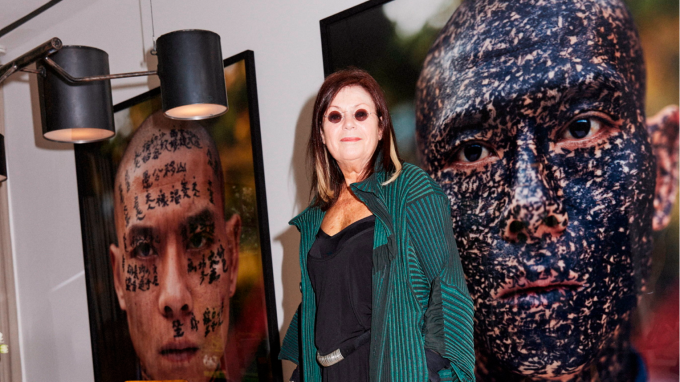