Wimbledon’s head groundsman on how to create the perfect lawn

A weed-free lawn cut with immaculate stripes can be the centrepiece of any garden — with mid-spring an ideal time to prepare the ground and sow seeds. Soil will usually be warm and moist enough for swift germination, with seedlings becoming established before the hot and dry conditions that can accompany high summer. First shoots can be expected to appear within 10 days, but for step-by-step guidelines giving best results, who better to consult than Wimbledon’s head groundsman?

Neil Stubley, 47, prepares grass tennis courts that must not only look the part for each tournament, but withstand the pounding feet and impact of balls hit by the world’s leading players during more than 650 matches. “There are no secrets to growing the perfect lawn,” he says when we meet in Wimbledon’s 42 acres of grounds in south-west London.

His team is preparing 18 championship and 22 practice courts for the start of Wimbledon on July 3, which means looking after 54m individual grass plants for Centre Court alone. With only one chance each tournament to get it right, the pressure is always on. Each court must “play” exactly the same in terms of hardness and ball-bounce and this depends on growing the most suitable variety of grass on identical soil.

Stubley joined the All England Lawn Tennis and Croquet Club as an apprentice in 1995 after a three-year course in horticulture. He worked under the renowned Eddie Seaward, who was head groundsman for 22 years, before taking over the role in 2012. He is only the eighth person to hold the post since Wimbledon’s first tournament in 1877. “It’s like holding the baton for distinguished predecessors and I feel every single day that I mustn’t let them down,” he says.

The tournament’s long history provides a legacy of knowledge for his 16 full-time staff. Their preparations begin the day after each championship ends when they remake every court from scratch.

Reassuringly, Stubley says: “While we use state-of-the-art equipment, tools found in many garden sheds, such as spades, forks, rakes and standard mowers, can do an excellent job [if you bear] in mind the golden rules for healthy lawns: hydration, feeding, light and air. Water regularly, apply a little fertiliser, avoid sites with excessive shade and don’t overcrowd seedlings. But it’s also important to set aside time for mowing at least once a week plus general maintenance and to remove weeds as they appear: like everything in life, the more time and care you put in, the better the results will be.”

On choice of seeds, he points out that a lawn for play and other recreation requires a hard-wearing surface composed of rye grass, whereas an “ornamental” look is best achieved using fine-leaved turf grasses.

Smart, pristine lawns are a big draw at some of the nation’s favourite stately homes and palaces, such as Hampton Court, south-west London, which boasts the impeccably neat Privy Garden, and has wonderful sweeping lawns surrounding the great fountain.

“A level seedbed is essential,” says Stubley. “Dig the ground, removing stones, weeds and any other debris. Then, [in] dry weather, walk the area with weight on heels to create a firm, flat surface, with light raking to finish off.”

A granular “starter” fertiliser with the nutrients nitrogen, phosphorus and potassium can also be sparingly applied.

At Wimbledon, a 100 per cent perennial rye grass provides the durability and look required for grand-slam tennis. For home lawns, where appearance is the most important factor and hard-use can be avoided, a blend of chewings fescue, strong and slender creeping red fescue and browntop can work well. “Garden centres can supply quality-assured seeds and fertiliser — along with advice on making the most of local soil types,” says Stubley.

While Wimbledon’s grass courts require nine tonnes of seed each year, he suggests using about 35g per square metre (a large handful) for garden lawns. After marking the squares with string, sow half the seeds from left to right, the rest top to bottom, before gently raking over a thin covering of soil. Protection from birds may be needed and Stubley has a novel solution: net curtains. “Spread over the lawn site, these will safeguard seeds from beaks, while allowing in light and rain,” he says.

The first cut using a sharp-bladed mower can be done when new grass is about 25mm high, but never reduce the height of new grass by more than a third to avoid weakening delicate shoots. Grass on ornamental lawns can be cut to around 10mm high. Always take account of the weather: avoid cutting wet grass and setting blades too low when mowing in dry and hot conditions.

Wimbledon’s grass is cut by one millimetre a week from a winter height of 13mm to the optimum playing height of 8mm about four weeks before each tournament — and kept at this level with mowing every morning of the championships. For domestic lawns, maintenance should include using a wire rake to remove moss and dead growth, regular watering and shallow forking for aeration — with any weeds swiftly removed. Stubley cannot remember ever spotting a single daisy on his courts — and a close inspection during my tour revealed only flawless grass.

Something close to the eye-catching stripes on Centre Court can be replicated using a mower with rear roller to cut once round the lawn and then going up and down in straight lines. This method folds blades of grass forward one way and then the other way, creating the light and dark stripes.

And his final piece of advice? “Lawns are a living, breathing surface — keep them healthy and you’ll be well rewarded. It’s more attention to detail and regular effort than rocket science.”

The grass roots of lawn-making

Originating from the Old French lande — a glade or clearing — the humble lawn would have been alien to the average home as little as 200 years ago, writes Lucy Watson. The word originally described areas of communal grazing, but from the Middle Ages onwards, small, clear patches of close-cropped grasses found new purpose as ostentatious displays of wealth. Few could afford to keep these high-maintenance tracts of land.

Although Henry III was so concerned with his that he reportedly brought in sod from other areas, early lawns were unlike those we have now. In the 16th century, French and English castles had lawns of chamomile and thyme, and it is not until 200 years later that we start to see tapis vert, or green carpets, integrated into gardens such as those of André Le Nôtre’s designs at Versailles.

The vast, undulating tracts of grass popularised by Capability Brown’s landscape gardens brought a new enthusiasm for cropped lawns, but these were limited to the estates of the extremely wealthy. Ornamental lawns, too precious for livestock, required weekly scything by labourers and regular use of a watering truck. In 1700 gardener John Evelyn described the invention as “the most elegant, usefull and Philosophicall” of tools due to its ability to mimic rain. It was only when Edwin Budding’s mower became widely available in the mid-19th century that the lawn became accessible to the middle classes — it was drawn by horses wearing leather lawn shoes.

At the beginning of the 20th century came a renaissance in urban planning, and with the work of social reformer Henrietta Barnett, garden cities and suburbs began to be built with greater consideration for open space, bringing with them the domestic lawns we recognise today. 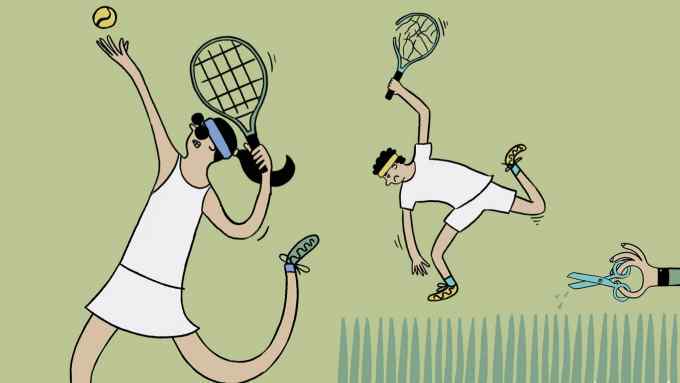