At Frieze, few conversations happen without another occurring simultaneously on a mobile phone, six-figure deals are de rigueur and art plays second fiddle to social whirl. Yet just a few hundred metres away, at the Sunday Art Fair on Baker Street, there’s an absence of WiFi, there are fine yet affordable works — mostly between £1,000 and £10,000 — and just 30 galleries laid out in open-plan style. The result is a laconic, less competitive ambience which draws a significant clutch of curators and collectors every year.

“Because it’s smaller, people really engage with the work rather than just ask the price,” said Lauren Marinaro at New York-based Marinaro gallery, one of 18 new dealers exhibiting this year, thanks to Sunday’s policy of constantly refreshing their intake. Organisers won’t give numbers, but it’s certain that dozens of applicants are turned down.

Marinaro’s baptism is proving fruitful. Just a few hours from opening, she had already sold two works: a skilful, graphic painting by US artist Ridley Howard of a couple kissing in front of an ice-blue mountainscape that resolves, on close inspection, into a picture within a picture; and Tracy Thomason’s splendid scarlet on cream abstract, whose sumptuous crust is built up through the application of oil and marble dust. Less obviously commercial is the performance of artist Cristina David at Ivan Gallery, a longtime Sunday exhibitor who represented the late, great Geta Bratescu in her native Bucharest. At the fair, David is making herself a scribble-board plan of how to pay for a scuba diving holiday. Should she find a sugar daddy? Or sell some art? For good and ill, her oblique whimsy should keep her head above water for some time to come.

Elsewhere at Sunday, an explicit political vein animates certain booths. It’s impossible not to be awed by Scottish-born, Berlin-based Andrew Gilbert’s show at the Munich space Sperling. Using acrylic and watercolour with meticulous ingenuity, Gilbert’s suite of works on paper wraps up the Battle of Rorke’s Drift, the Charge of the Light Brigade and Brexit into an incensed visual diatribe against imperialism and xenophobia.

More understated but equally impassioned are cut-out photographs by Croatian practitioner Vlatka Horvat at Milan gallery Renata Fabbri. Carving delicately around archival images of her mother taken in the 1960s, Horvat references the desire to erase history which she observed in her homeland when she returned after being trapped in the US during the Balkans War of the early 1990s.

A commitment to collective memory is, interestingly, also present at Moniker on east London’s Brick Lane. Billed as an urban art fair, the event — now in its tenth edition — lives up to its lofty promise “to remain unashamed and unafraid” by partnering with the Urban Nation museum.

Opened in 2017 and offering artist residencies as well as exhibitions, Urban Nation is the first museum dedicated to street art in Berlin, a city garlanded with graffiti. In London, Urban Nation director Yasha Young and Moniker director Tina Ziegler co-curated Uncensored, a display of art they hailed as “revolutionary”. Indeed with very little for sale, the gesture felt rebellious in this week of unbridled consumerism.

Among a host of fascinating projects, I paused longest in front of a pastel-hued, propylene wall sculpture laced with barbed wire by French practitioner David Mesguich. “My father was a gangster,” the softly-spoken Mesguich explained when I asked him to explain the lethal fence. “We used to have to flee over the Italian frontier illegally to escape the police when I was a child, so I’m concerned with borders.”

Mesguich’s story, which saw him imprisoned for his street graphics, is just one of several real-life melodramas that makes Moniker a grittier experience than Frieze with its Botox-smooth narratives. Others, also in Uncensored, include a wall installation of handcuffs from US-born, train-writing magi Utah & Ether. Banned from entering the UK or returning to North America, the pair — now based in Germany — are described by Ziegler as the “Bonnie and Clyde of street art”. Most heart-rending is a row of porcelain bootees suspended from the ceiling by US artist Ann Lewis. Entitled “. and counting (Syria)”, each pair represents a child who will perish during the four day duration of the fair.

These wake-up calls to our consciences fail to drown the chatter of commerce. In the main hall, with opening festivities still in full swing, Spoke Art had already sold three paintings of whimsical, serpentine figures by US artist Erik Jones. “I don’t consider myself an urban artist but I’m happy to be here,” said Jones, who was visiting London for the first time. Indeed, as a unicyclist toting a plastic rifle — part of an anti-gun performance from an artist known as Rocco and his Brothers — glided through the flush-cheeked revellers, art’s shadow side was, briefly at least, eclipsed by its worthier sun. 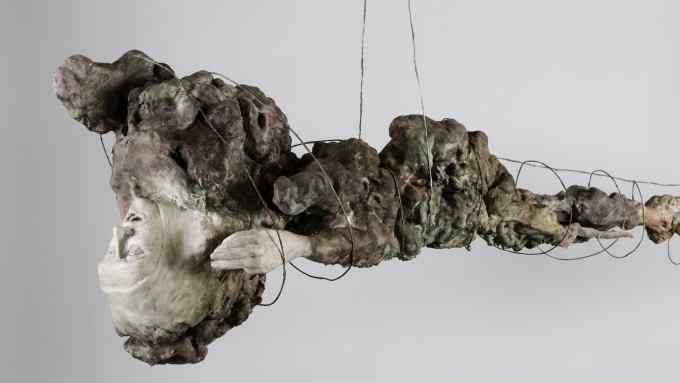