At Paris Fashion Week, Dries van Noten — a Belgian designer known for his keen eye for colour and his ability to pair carefree slouch with elevated pattern mixes — has emerged as an unlikely disruptor.

At his Spring/Summer 2020 show, it was revealed that van Noten had partnered — on his entire collection — with Christian Lacroix, the French designer who rose to recognition in the 1980s and 1990s for his “pouf” skirts and exuberant colour palette. (His couture house closed in 2009.) There had been rumors, but a single red rose on every guest’s seat gave it away: they were tagged with a paper placard that read “DVN X CLX”.

Nowadays, it is relatively standard practice for individuals and labels to collaborate on segments of their seasonal offerings. It is much rarer for them to join forces on full collections.

“I found myself needing exuberance, opulence, another volume, and fun,” said van Noten, noting his attraction to the more audacious elements of 1980s and 1990s-era styles, of which Lacroix was a master. “I realized that all roads lead to the work and world of Christian… I was so happy when he said yes.”

Notably, van Noten and Lacroix do not own their own labels or namesakes; the former sold a majority stake in his, in 2018, to the Spanish luxury group Puig. The latter offloaded his trademark and his moniker to the Florida-based Falic Group, which produces Lacroix-branded home goods, gifts and accessories.

Lacroix has enjoyed a successful post-runway career as a costume designer in theatre; van Noten seems more upbeat than he has in years. Their shared ebullience resulted in a striking if slightly jarring collection, but one that was pitch-perfectly balanced when examined up close.

See, for example, the one-two punch of Lacroix-esque pink trousers accented with marabou feathers worn beneath an oversized heather gray jumper. The styling was excellent, and, while the customer may not go for this sort of juxtaposition in real life, the look made for a transportive highlight.

Same with the outfit that followed: van Noten and Lacroix’s suggestion for wedding-wear. The model sported a sheer throw wrapped in whirls of trim and yet more plumage. This, as one might guess by now, had Lacroix’s hand. Underneath, though, was a tank top and a pair of white jeans. She’d be an adventurous bride, for sure, but an ingenious one, too.

Van Noten summed it up as, “something joyful, full of skills, full of materials, and full of emotion.”

Get alerts on Womenswear when a new story is published 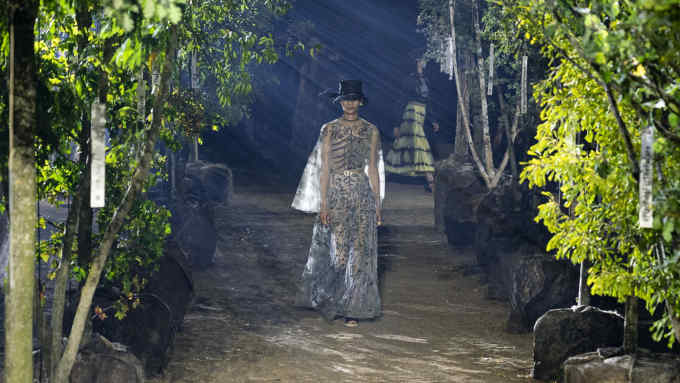