Kevin Guo decided where he wanted to pursue his business education after his parents returned to their home in Guangzhou, China, from a 10-day holiday to New York, in 2010.

“They came back with a postcard of Times Square for me and told me that New York was so vibrant and so full of talent,” Guo recalls. “I knew, then, I had to go.”

He arrived on a student visa to complete his high school studies in Staten Island nine years ago, securing a place at New York University in Greenwich Village for his bachelors degree in economics and mathematics. Gao then went on to Columbia Business School in Manhattan for a masters in financial economics. He has just graduated and is about to start at Morgan Stanley as an equity trader.

“I feel very honoured to be here,” he says. “When I came, I did not have any strong family ties here — but I have been able to achieve all of this. I am living the American dream.”

The four-decade march of globalisation is currently at risk of going into reverse with the rise of geopolitical divisions — notably, those caused by the war in Ukraine, US tensions with China, and the UK’s exit from the EU. Pandemic lockdowns have also made it harder for graduate students to take courses overseas. However, the lure of the world’s banking capitals remains strong for those seeking financial training.

Preferred study destinations for ­business school students have barely changed in the past two years, according to data compiled by the Graduate Management Admission Council, the business school entrance exam administrator.

Despite the full implementation of Brexit, the percentage of students choosing to study courses at a British business school — which, in most cases, means London, according to GMAC — rose from 7.9 per cent in 2019 to 8.8 per cent last year.

What has changed is the proportion of students choosing to study closer to home, according to Tim Mescon, executive vice-president at accreditation body the Association to Advance Collegiate Schools of Business (AACSB). This has happened even at some of the world’s most international schools, with the most geographically diverse student intakes, he notes.

British nationals are a small minority on the full-time masters in finance course at London Business School but, in 2022, they increased from 4 to 6 per cent on the back of a growing class size, from 123 in 2021 to 132 this year. Students from south-east and east Asia made up about a third of the class in 2021 but only a quarter in 2022.

The biggest regional growth at the school was among students from the Middle East and Africa, whose numbers increased by a third year-on-year.

“The pandemic has given many business schools the opportunity to reinforce the depth, value and impact of their masters programmes to the national markets they serve,” Mescon explains.

Frankfurt School of Finance and Management benefited from the lockdown rules that prevented German students from travelling abroad to study. But demand is as strong this year as in 2021, even after the removal of restrictions. This is because of the increasing importance of the city to Europe’s financial services sector, according to Nils Stieglitz, president and managing director of the school.

“Frankfurt has enhanced its international profile and [its] position has improved due to Brexit,” Stieglitz says. “Big banks such as Deutsche and Commerzbank are finally back on a growth path and are adding jobs. We have also benefited from the movement of regulatory bodies to Frankfurt due to Brexit.

“The big win for us in this was the placement of the International Sustainability Standards Board here. Many European banks have also moved their European headquarters to Frankfurt because of Brexit.”

International finance hubs have inbuilt advantages compared with other cities, such as a critical mass of employers able to offer higher wages, which creates a virtuous circle of applications for the best talent. Neither the pandemic nor tensions in international relations have broken this, according to Dionisis Philippas, an associate professor and head of the MSc in International Finance course at ESSCA in Paris.

“To be a financial hub takes years and neither the pandemic nor Brexit will change the big European hubs,” Philippas says.

Singapore Management University had close to a record number of applicants for its masters in applied finance programme this year, helped in part by students from Pakistan and Bangladesh choosing SMU over schools in the UK, according to Chan Soon Huat, the programme’s director.

“For the south Asian market, we are pretty attractive,” he says, noting that the financial hub has benefited from growth in India and China, and was a good alternative for prospective students in South Asia when the US and UK went into lockdown.

“Asia is the fastest growing region in the world and Singapore’s proximity to such economic growth markets as India and China is one of our big selling points,” Huat observes. “Singapore is so tiny and multiracial [that] there are a lot of networking opportunities if you come to SMU.”

Those schools in cities not traditionally strong in financial services are finding ways to attract students to their masters in finance courses by specialising in teaching new skills for the digital age of banking.

Miami Herbert Business School is trying to position itself as a leading centre in cryptocurrency education.

“We have increased the size of our business technology faculty and our entrepreneurship faculty are also up to speed on crypto,” says, John Quelch, the school’s dean. “We are seeing a surge in student applicants to Miami Herbert graduate degrees who are interested in crypto and want to establish their network in Miami in order to set up shop here full time.”

Not that this is concerning to highly ranked schools in the traditional financial hubs. The number of applications to Columbia Business School’s masters in financial economics course was up 20 per cent this year.

Course director Harry Mamaysky attributes this to a mix of the solid New York jobs market, the highly multicultural student population — which makes people feel at home wherever they come from — and the school’s investment in new campus facilities.

As a freshly graduated Columbia student, Guo expects to be working in New York for several years.

“This city has so many talented people and what I found was that many of my classmates were pushing themselves constantly to reach the next level,” he says. “This competitiveness rubs off on you and pushes you to achieve new goals.”

Guo believes he could then see his career moving around the world to other financial hubs now that he has completed his financial training. “I just want to make more money in the future, so I will just follow the money.” 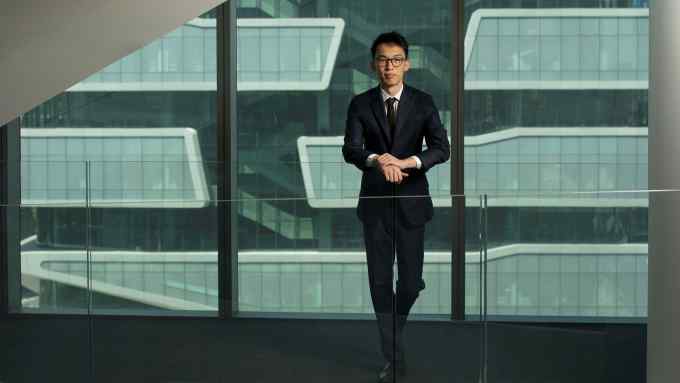