Sign up to myFT Daily Digest to be the first to know about South Korean business & finance news.

International short sellers are charging back into South Korea after the country lifted a 14-month ban on betting against blue-chip stocks, piling pressure on shares favoured by retail investors.

Investors have sold short South Korean stocks worth Won7.1tn ($6.3bn) since the ban was partially lifted on May 3. Under the relaxed rules, investors can make bearish wagers on stocks listed in the large-capitalisation Kospi 200 index and the tech-focused Kosdaq 150.

Short sellers make money when the share price of a company they have targeted falls.

While the broader Kospi Composite benchmark was little changed since the ban was lifted, Korea’s influential mom-and-pop investor community has been up in arms over the development, fearing it could weaken their favoured stocks. That is despite short sales making up just 2.9 per cent of total trades since May 3, according to data from bourse operator Korea Exchange.

“It is bound to have a negative impact on the market,” said Jung Eui-jung, the head of the Korean Stockholders’ Alliance, which represents about 44,000 retail investors. “The problem is the uneven playing field with many short selling regulations still in favour of foreigners and institutional investors.”

Celltrion, one of Korea’s leading biotech companies, was the most shorted stock by value on the Kospi since the ban was lifted this month, followed by technology stocks such as Samsung Electronics and LG Display. Biotech companies including Seegene, Celltrion Healthcare and Hyundai Bioscience as well as gaming groups such as Kakao Games have also been targeted by bearish investors.

Covid-19 test kit maker Seegene fell 12.4 per cent in the first two weeks of May, while Kakao Games declined 7 per cent.

But the impact on the overall market has been limited, analysts said. Hyundai Merchant Marine and Hyundai Motor were up 11.5 and 8 per cent, respectively, in the first two weeks of May, despite heavy short selling.

“The shock on the market is less than expected,” said Paul Choi, head of research at brokerage CLSA in Seoul. “Short selling is helping the market find fair value of stocks, especially those with stretched valuations.”

Foreign investors accounted for 86.7 per cent of total shorts on the Korean main board in May, compared with local institutions and retail investors that made up 11.7 and 1.6 per cent, respectively.

Overseas investors have called for the full resumption of short selling, arguing it enhances their ability to hedge exposure to Korean stocks. 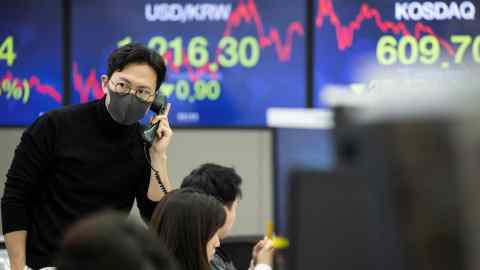 Korea was one of the few markets to outright ban short selling, drawing criticism from hedge funds and other professional investors. The ban became a political issue, drawing support from some lawmakers.

“We don’t see any reason why investors shouldn’t be able to take alternative views of these companies as a two-way market would more accurately reflect their value and potential,” said the Pan Asia Securities Lending Association, which represents groups that borrow shares such as short sellers.

“If you compare index performance and short selling volumes on a day-by-day basis since the ban was eased, there is no clear correlation between the two.”