If you think the same, join us
Special Report Women at the Start
See all 9 stories
Personal productivity

Limit working hours, turn off notifications and be kind to yourself

Caffeine regimens and perfected email headings are among some of the chirpier personal productivity hacks that have faded during the pandemic — with many workers struggling to stay sane as the lines between the professional and personal blur.

Studies have shown that while office workers are generally working well from home, some groups have found it harder to adapt to new and sometimes isolating job conditions.

Mothers who juggle careers with disproportionate responsibilities at home are among the hardest hit groups. But women without children have also reported lower productivity levels, which researchers at the University of Chicago’s Becker Friedman Institute for economic research say could be due to “other demands placed on women in the domestic setting”.

With homeworking expected to remain commonplace for many — even as the pandemic recedes — executives recommend habits that can promote healthy bursts of work, and leave enough time for rest.

Claire Darley, vice-president at software company Adobe’s Europe, Middle East and Africa business, manages 120 people in several countries. “Everyone has struggled with the day getting longer and stretchier,” she says. “I certainly have, too.”

To ensure she stays “fresh and on fire” Darley has become stricter about observing the hours in which she will not take calls or join virtual meetings: “People don’t think you are a flake . . . actually, they respect you for it.”

But while she advocates for professionals setting boundaries on day-to-day tasks, her top advice to young women wondering how to achieve more is to identify potentially career-enhancing opportunities, and take them.

“One of the things I often say to women, especially those at the beginning [of their careers], is it’s all about chances, making and taking chances,” says Darley. She points out that she secured her first internship at IBM 30 years ago by networking with a graduate from her university who had already done a similar work placement.

“I made my own chance by being cheeky, asking questions and getting myself on the interview list.”

Noelly Michoux, co-founder and chief executive of skincare brand 4.5.6, sought the help of a life coach to stop a creeping feeling that constant firefighting meant she was not actually achieving anything.

“It would leave me with an awful feeling that I took home from work, so I would not really be present with my family either, and then I would go to bed with the guilt of not having had a fulfilling day, neither on a professional or personal level,” she says.

The life coach has taught Michoux how to manage her mind and emotions and, most importantly, to be kind to herself when things do not end up the way she had planned. “It is not something you can just read about, you have to practise and practise until it becomes a habit,” she says.

One of Michoux’s new habits is turning off notifications on her personal and work devices between 9am and 5pm, meaning she only checks emails and messages on social media at allocated times, rather than when they come in. This applies also to her friends, who she says no longer expect an immediate response when they reach out.

Michoux has identified her most productive hours (between 2pm and 6pm) and will try to get emails and meetings out of the way before tackling more difficult tasks after lunch.

“Get your brain into the habit of doing the same kind of task, on the same day and at the same time. Then you become super effective,” she says.

Mairead Nayager, global head of HR at drinks business Diageo, says she started her career sleeping just a few hours a night and putting strain on her body just through the sheer amount of time she spent sitting down at her desk.

“I ended up with a back injury and surgery at 31,” she says, calling the experience “ridiculous” but also a “really big shift in my thinking”.

From then on, Nayager decided that the key to increased productivity was to take control over her work habits.

“There’s an expectation to do these crazy long hours,” she says about modern workplaces. “No matter how much you work in a given day, there’s always something else that’s left undone. So I think taking control over how you work is important.”

Nayager, who has about 600 people in her team, says that Diageo — like many other companies — has not suffered a productivity drop during the pandemic. It is, however, not uncommon to hear from members of staff who say they are spending longer hours at work to reach the same level of output.

Despite the potential pitfalls, homeworking at scale has revealed that even big multinational companies have quite a bit of flexibility to accommodate people’s preferences for work. Nayager applies this on a personal level as well.

Unforeseen circumstances, such as a colleague staying up all night with their child, happen every now and then and Nayager might encourage someone to “maybe just park the day, go to bed early and start afresh the next day”.

“That’s certainly what I will be doing today, as my toddler woke me up at 3:30 in the morning, and so I wouldn’t even be very productive if I worked late tonight.” 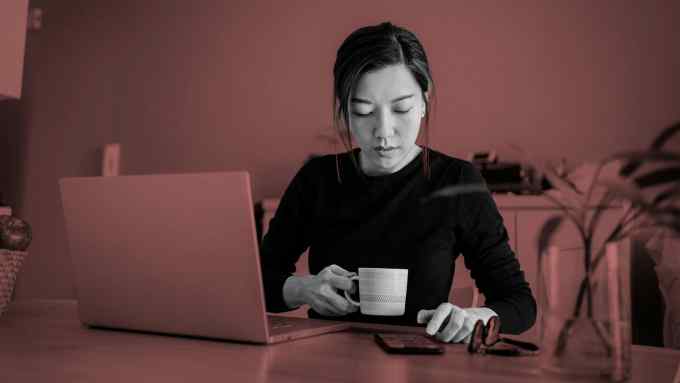