Coach SS19 show report: where the Aristocat is king

A vast scrap-metal sculpture worthy of Burning Man dominated the set of the Coach SS19 show. The models wore floaty tiered prairie skirts, burnished leathers, ruffle-fronted blouses in the New Romantic manner and jumbly-looking hoodies featuring faded Disney prints. Bambi skittered abstractedly across a sweatshirt; the Aristocats sat, upside-down, on a tee. With their wild hair, platform-sneaker-slash-moccasin boots and single eyes framed with a silver line, the models gave the impression of being part of some spooky, lunar, animation-loving sect.

In a season that has, for the most part, been rooted in a very everyday functionality — the “intellectual” label Proenza Schouler showed workwear denims and tie dye, and even Oscar de la Renta was refreshingly relaxed — Coach was one of the few catwalks that hinted at a narrative.

“I think we have played with a little bit of fantasy this season,” said Stuart Vevers, the no-nonsense Yorkshireman at the brand’s creative helm. He’d been inspired by a night out at a dive bar in Santa Fe, while exploring the Turquoise Trail. In particular, he had been impressed by how the local kids had put together looks that seemed somehow “salvaged” and yet utterly their own.

The result was a dustier, dirtier version of Coach Americana than the collections that have come before. The floral prints looked sun-bleached and faded. The leather had been washed to look more aged, and bags were a patchwork of patterns and prints.

But while these Ghost Ranch wraiths were certainly charming, especially the ones in the Dumbo prints, they didn’t quite convince. Sitting in the cavernous riverside showspace, I found some of the ideas a bit hard to digest. As part of the newly created Tapestry group, the multi-brand corporation that includes the handbag company Kate Spade and shoe label Stuart Weitzman, Coach helps drive a multi-billion-dollar business selling reasonably priced bags and clothes that are invariably made in China. I have no issue with that. And I have nothing but admiration for Vevers, who has been so instrumental in making it work. But the thought of the Coach girl (and boy) as some kind of counter-culture bohemian, cobbling together a wardrobe in a sand-swept wasteland, was a bit too much of a stretch.

The Disney prints were more convincing, especially when subverted or printed the wrong way up. Vevers (a self-described Disney fanatic) had found a way to make some of the most recognisable characters on Earth seem strangely unfamiliar — and the hoodies were alluringly good. Moreover, as an alternative narrative, in which one giant US corporation tickles another for mutual gain, it all made far more sense. 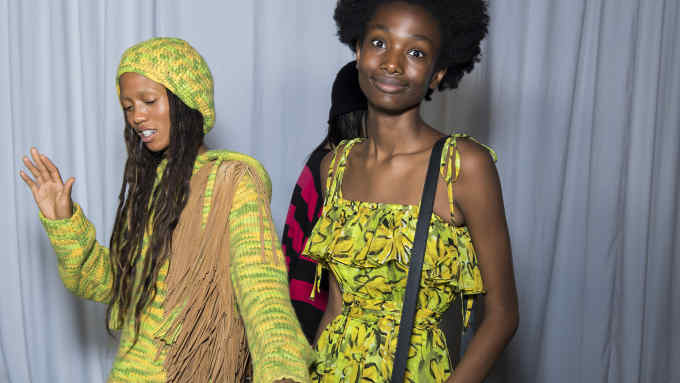