Surviving divorce: a guide for family businesses and charities

We’ll send you a myFT Daily Digest email rounding up the latest Marriage and divorce news every morning.

When Bill and Melinda Gates announced their marital split last month, the immediate question was what would happen to the Gates Foundation? The message was clear: the couple are divorcing, but their charitable foundation, which has distributed $55bn since its launch in 2000, and their support for it would not diminish.

In an email sent about the same time as the divorce was announced, Mark Suzman, the foundation’s chief executive, said Bill and Melinda would remain co-chairs and trustees. “They will continue to work together to shape and approve the foundation’s strategies, defend the foundation’s problems, and establish the overall direction of the organisation,” the foundation said.

But some have raised doubts about how this will work in practice. “From my experience, if a couple are both actively involved in a business or charitable foundation together, and if they decide to separate romantically, it usually follows that they will also separate from any joint professional and charitable endeavours,” says Adele Pledger, a partner in the family team at law firm Withers in London. She has acted for high-profile multimillionaires and billionaires in their divorces and was involved in the foundation side of the divorce of Sir Chris Hohn, the hedge fund manager.

Suzman has said the Gates Foundation is considering shaking up its governance, although there have been no details of how. Pledger suggests the future of such organisations depends on how amicable the break-up is, and how much respect and trust remains between former spouses. “In some circumstances, people may start off with good intentions . . . of being able to . . . work together, but then relations may get more acrimonious or strained. For instance, if one person starts another relationship, the wheels may fall off,” she warns. 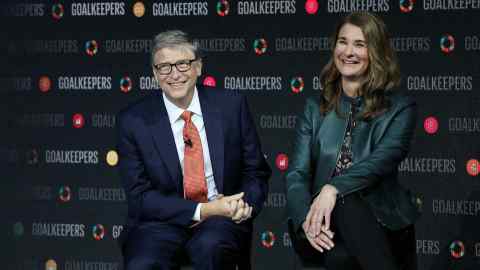 The Gates’ split comes two years after another high-profile billionaire business couple ended their marriage. Jeff Bezos, founder and chief executive of Amazon, and MacKenzie Scott, finalised their divorce in 2019. The couple had worked closely together in the early days of the ecommerce company. Other examples include Elie and Rory Tahari, international fashion designers who worked together in the Tahari business for 11 years but separated in 2010 and split their clothing brand; and Chris and Tory Burch, who founded the Burch fashion empire but whose marriage ended in 2006, with Chris launching his own clothing brand and Tory keeping Burch. In contrast, Stefano Gabbana and Domenico Dolce started their Italian fashion company as a couple and, despite splitting in 2005, continued to live near each other and to work together.

Divorced couples who remain amicable and share a goal are more likely to make a business relationship work, says Natalie Kay, a partner in Kelley Kronenberg’s family and marital law practice in Fort Lauderdale, Florida. She points to the philanthropic work put into the Bill & Melinda Gates Foundation from the start. “No one can question the impact this foundation has made,” she says. “One would be inclined to believe the divorcing couple are still passionate about fighting poverty, disease and inequity . . . Their joint desire to make a difference in the world is mutually exclusive to their marital tranquility.”

If it is established that each party has equal rights to a business, there are several ways to proceed. If couples remain amicable, they can continue to run the business together after the divorce. Alternatively, couples can sell the business and invest the proceeds in their own businesses. Or one spouse can buy out the other’s interest.

“If there are not enough liquid assets, the company, or part of it, may be sold,” says Phoebe Turner, managing partner at Stowe Family Law in the UK. “Alternatively, both parties may decide to continue to remain part of the company for post-divorce emotional and/or financial reasons, à la Bill and Melinda.” She adds that this is rare: “Most couples do not feel they can continue working together after separating.”

The English courts prefer divorcing parties to sever all financial ties if possible and affordable, so people can move on with their lives independently. Couples who choose to stay in business should be aware that working together after divorce can be fraught, both practically and legally.

Matthew Humphries, a partner in the divorce and family department at law firm Stewarts in London, says for it to work there must be a written agreement, such as a shareholders’ agreement, covering in detail the allocation of responsibilities and how decisions shall be made. There should also be an agreed shared objective ensuring both partners have a common goal and a shared incentive to achieve it. “If the former spouses intend to keep working as a pair, they should consider appointing external independent advisers to help ensure there is an independent decision maker in the event of deadlock,” says Humphries.

Other advisers say if both parties want to continue in a business or a charity but also want some autonomy and independence, there are other options. For instance, a business could be restructured — a demerger, for example — so that each party remains involved but has their own branch of the business. Sometimes, it may be possible for sub-funds to be created in a charitable foundation, but that needs agreement from the other trustees and must be in pursuance of the charitable objectives.

If the divorcing couple and their employees are not clear from the start about what will happen and about their rights and obligations, it increases the chances of litigation — which nobody wants, says Pledger. “It is far better to get it all wrapped up at the outset, rather than try to muddle through and address problems as they arise.” She says the process of figuring out how everything will work in practice may “make it apparent that it’s not . . . a feasible option and . . . the idea is abandoned”. Pledger draws parallels with how “negotiating a prenuptial agreement can sometimes flush out relationships that are doomed for failure”.

Common pitfalls include believing everything can carry on as normal and no thought needs to be given to how a dispute will be resolved if communications break down — which is not uncommon when people start new relationships.

Another mistake is to become emotional and lose focus on the business. “Going through a divorce is a huge distraction for a business owner,” says Colleen Carcone, director of wealth planning strategies at financial services company TIAA in Boston.

“If both spouses can explicitly acknowledge their mutual interest in keeping the business healthy, the owners can present a confident, controlled picture of the business when they interact with third parties and employees.”

Advisers say to maintain a brand’s value, it is important to rise above emotions. “Even if you disagree on how to run the business, you need to behave professionally,” says Chemtob. “I’ve seen everything, from spouses locking staff out of the office, to taking back the office key cards, paying the doorman not to let the other spouse in and getting the IT department to deny access to computers. This sort of behaviour . . . will just harm the business.”

Wellbeing and fitness
The FT guide to divorce 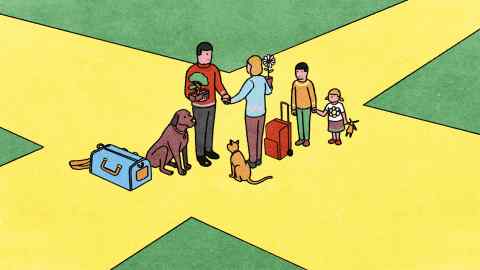 Other tactics include scaling back on business to show less income or delaying a large transaction to lower a business’s value. But lawyers say the business should be operated in its own best interests, rather than those of the divorcing couple. “People always ask me how to manage their company through a divorce. I would say, ‘exactly how you did before’,” says Lorraine Nadel, a partner and litigation attorney at law firm Nadel & Ciarlo in New York.

The key is to have a reliable team of professionals looking after the business interests from day one, says Daniel Nottes, a partner in Cassin & Cassin’s New York office where he leads the law firm’s matrimonial and family law practice. “Divorce doesn’t have to be the two Ds: disaster and destruction. People can continue to work together as long as there is planning involved,” he says. “When you get to the levels of wealth of the Gates and Bezos, the real decisions are made by the accountants, lawyers and business managers. The business should keep going even when the marriage is falling apart.”

Nottes says he represented a celebrity couple who were able to continue their charitable business for many years. “Where it got dicey was when things got personal again,” he says. “The former couple didn’t focus on what their professionals were telling them — they got sidetracked over why they got divorced in the first place.” It also never works if people continue to be emotionally involved after they have split up, he adds. “You need to share goals for the business, but don’t share beds.”