If you think the same, join us
Europe quantitative easing

ECB split deepens over scaling back bond-buying as economy improves

Don’t miss your essential guide to what matters in Europe today. Delivered every weekday morning.

European Central Bank policymakers engaged in a lively debate last month over whether to slow the pace of its emergency bond purchases, in an indication that the argument will take centre stage in their upcoming policy meetings.

The central bank’s more conservative “hawks” called for asset purchases to be scaled back in response to the brightening economic outlook and improved financing conditions, according to the minutes of last month’s meeting of the ECB governing council. The more “dovish” proponents of loose monetary policy resisted.

In the end, “a broad consensus” emerged in favour of maintaining the current level of monetary stimulus being delivered by its €1.85tn pandemic emergency purchase programme (PEPP), the minutes reported. That makes it likely the issue will be revived at the next policy meeting later this month, before a likely decision at the subsequent meeting in September.

The ECB stepped up the pace of PEPP to €80bn a month in March and has just over €660bn left to spend; the PEPP is due to last until at least March 2022.

“In view of the better outlook for growth and inflation and the associated upside risks, it was . . . argued that, to provide the same degree of accommodation, asset purchases should be scaled back somewhat,” the minutes said.

Some council members expressed concerns about potential side effects of maintaining bond purchases “because it might hinder structural change in the corporate sector and resource reallocation in the labour market. In addition, property price dynamics were accelerating”.

The debate at the ECB has also been playing out at other central banks, some of which have already decided to slow the pace of bond purchases, such as in Canada and Australia. Others like the US Federal Reserve are still debating when to wind down their stimulus. 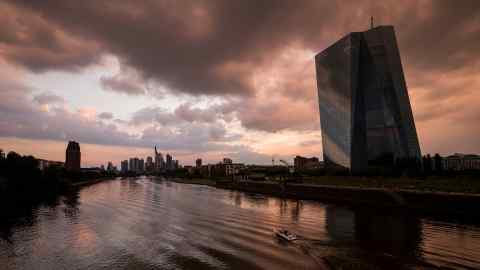 The contest has been given added spice by the ECB’s announcement this week of its new strategy, which commits to a slightly higher inflation target of 2 per cent that can be exceeded temporarily to avoid getting stuck at ultra-low rates.

Michael Schubert, economist at Commerzbank, said the policymakers’ split meant “a fundamental decision of how to proceed with the PEPP and other emergency measures might be difficult to reach”.

However, the ECB said ultimately “most members expressed their readiness to join a broad consensus behind the proposal” made by ECB chief economist Philip Lane to maintain the pace of its bond-buying. It said financing conditions were “assessed as too fragile” to allow a slowdown in bond purchases “without risking a disorderly rise in yields”.

The recovery was still “at an early stage and lacked robustness,” it said, adding that some council members expressed concern that slowing the pace of its bond-buying when inflation was still not forecast to hit its target in two years' time would “cast doubt” on its resolve.

One council member even suggested that it should increase the pace of asset purchases “in view of the persistent inflation shortfall projected in the June staff projections”.

Last month the ECB forecast inflation would fall from 1.9 per cent this year to 1.4 per cent in 2023.