Milan, June 2022: I am standing in a salmon-pink room gazing at an artwork by the late designer and architect Aldo Rossi. A Dalí-like depiction of a giant coffee pot, perched against a cone-topped building between a horse skeleton and lobster, it conveys in one mind-bending image both his explorations of memory and scale and a vision that made no distinction between architecture and design. Another of his works shows Milan’s Duomo peeking through the window of a sunlit room. It strikes a chord when viewed within the Museo del Novecento, the museum facing the white cathedral. Aldo could have conceived the painting on this very spot.

The Duomo is an old friend. I’ve been visiting Milan and its annual design festival for countless years. Earlier this month, though, my return felt like a homecoming. The sun was shining, the city buzzing and on every corner were posters proclaiming: Design is Milano and Milano is Design.

The catchy slogan was a reminder of how design has connected everything in this corner of the world. It is its lifeblood, with Fuorisalone long playing a role in the heritage and culture of Milan. Consequently Rossi, star of the city’s design exhibition, was also a constant companion on my sojourn, appearing at Alessi’s takeover of Galleria Manzoni, marking the brand’s 100th anniversary (an unsurprising cameo given that his coffee pots are among the brand’s design classics). The air of surrealism here was palpable: one store morphed into a curling rink, with kettles used as slide stones skimming across the ice. Next door, nutshells were laid to waste by Enzo Mari’s phallic Farfalla nutcracker: function combined with the brand’s trademark tongue-in-cheek humour.

At the event, president Alberto Alessi did not dwell on the past. He preferred to point to app-enabled small appliances before making the big reveal: a new take on cutlery by the late Virgil Abloh, in collaboration with his London-based design studio Alaska Alaska, conjuring childhood memories of Meccano cranes. It was a bittersweet testament to the designer’s prolific output. Across town at Cassina, another Abloh design hook-up was being celebrated – modular “building blocks” capable of transforming into anything from benches to a side table.

At the museum in Molteni&C’s headquarters, a Rod Gilard-designed glass cube on the fringes of the city, Rossi returned. His gravity-defying angled Parigi chair was one of the many designer collaborations that the family-run business has commissioned over its 88-year history: the treasures on show included a Gio Ponti writing desk, Luca Meda’s Primafila sofa and Tobia Scarpa’s Filo chair. Its archivist Peter Hefti reminded me of the brand’s own design connections: founder Angelo Molteni was one of the 13 entrepreneurs who established the Salone del Mobile fair in 1961 – which now hosts its current design stars. Back at the Salone, I was one of the first to view Vincent Van Duysen’s new deckchair-like Yoell chair and Living Box, a storage system comprising a neat box inside an open unit offering infinite uses, and chameleon-like when designed in different materials. Yabu Pushelberg’s reinterpretation of its classic Dada Tivalì fitted kitchen, meanwhile, concealed swathes of marble behind two giant doors.

The next three days were a maelstrom of espresso-fuelled curtain drops and champagne cork pops. Trends – or anti-trends, as some of us called them – emerged. The new rule was to break the rules: at La DoubleJ, new Murano glass vases in jewel-like colours and clashing print tableware for the upcoming festive season were shown among flower-power dresses on Via Sant’Andrea, creating a joyous assault on the senses. Clashy-mashy style also featured at Return to Arcadia, a collection for the fabric house Rubelli by the British designer and FT columnist Luke Edward Hall.

HTSI
Do the pebble dash 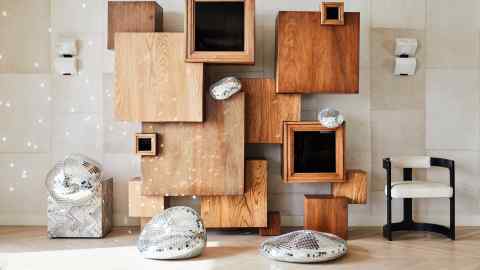 Outdoor furniture as indoor furniture continued to be the focus of modern furniture brands. Poltrona Frau added new pieces to its Boundless Living collection, shown alongside a series of leather objets created with Acqua di Parma and Loro Piana fabrics launched last year. Fornasetti’s garden furniture, punctuated by vibrant pops of colour and emblazoned with the whimsical motifs long associated with the Italian design maestro, was a show standout.

Young creatives and design upstarts took over the city’s galleries and abandoned spaces. Studiopepe’s immersive installation, set in the industrial wasteland that is Baranzate Ateliers, presented a collection of furniture and objects with Galerie Philia, marking the studio’s debut in collectable design. Dimore Studio turned its gallery into the otherworldly smoke-filled exhibition Oublié, and Nike was in town with an eco-vision, seizing the 29th-floor Eden Skyhouse on Via Vittor Pisani. Craft and sustainability were entwined into visions for the future, merging brilliantly in Loewe’s exhibition Weave, Restore, Renew – exploring leather, Coroza straw and Jiseung paper weaving.

Fashion staged a takeover of the festival – its laser-focus on interiors a clear statement of intent. Few could fail to notice the new additions of the Fendi and Dolce & Gabbana megastores to the city, both lifestyle meccas for fashionable living. Fendi showed new designs, including a jaw-dropping bar cabinet conjuring its signature Pequin stripes in rich veneers. Among its star collaborators were Swiss design trio Atelier Oï, who were in town to oversee their Fendi creations in situ, including their dome-style Metropolis table. The trio also designed new pieces for Louis Vuitton, previewed at the French fashion house’s colour-saturated installation on Via Bagutta. Its Belt Lounge Chair, Belt Bar Stool and Belt Side Stool featured seats made of strips of Vuitton leather held in place with brass buckles – reminiscent of those used on the maison’s bags.

Milan became a catwalk: Aquazzura launched its first casa collection in the form of flora- and fauna-smothered tableware; Dior Maison collaborated with Philippe Starck, who reimagined its Médallion chair – revealed dramatically at the show in a subterranean black box under dancing floodlights; and Ralph Lauren threw the chicest evening bash in Milan, recreating its vision for living in a grand palazzo on Via San Barnaba. Among the British designers stepping out, Stella McCartney revealed her first ever interiors partnerships with Italian design brand B&B Italia and heritage British wallpaper house Cole & Son, while Paul Smith debuted sofas, armchairs and coffee tables with the company DePadova, all shaded various Pantone tones.

Show stalwart Tom Dixon was also in reflective mood, looking back at a body of work presented as sculpture in collaboration with Sotheby’s at the neoclassical Palazzo Serbelloni, before launching his new limited-edition 20th-anniversary accessories and fragrance collection. What emerged was no longer just a celebration of furniture, but an event relishing wider conversations about the importance of design – a medium touching every aspect of life from the contour of a fork to the sweep of a car or the arch of a building. Aldo Rossi would have been impressed.