If you think the same, join us
Myanmar

We’ll send you a myFT Daily Digest email rounding up the latest Myanmar news every morning.

A surge of Covid-19 infections is swamping Myanmar’s threadbare healthcare system, causing bodies to pile up at cemeteries and crematoriums and adding a virulent element to the disorder that has followed the coup in February.

People are queueing before dawn to fill oxygen cylinders for ailing relatives and panic buying chicken and eggs in the belief that the foods will help boost immunity. Social media is awash with accounts of hospitals having to turn away patients and people dying alone or on the street.

General Min Aung Hlaing, the junta chief, appealed on Sunday for volunteers and for “organisations and associations to co-operate with us as much as they can”.

Covid cases have more than doubled every week in recent weeks, reaching more than 234,000 cases and 5,281 deaths. But the World Health Organization believes infections numbers may be under-reported because Myanmar, with a population of 54m, is testing only 12,000 to 15,000 people a day.

The outbreak in Myanmar comes as its regional neighbours, including Thailand, Indonesia and Malaysia, have also had to contend with record Covid caseloads linked to the more contagious Delta variant.

Health officials and human rights activists in Myanmar said the pandemic was proving particularly lethal because of public mistrust in the military regime, which has attacked, jailed or killed scores of health workers for opposing its seizure of power.

“People are crowding in front of oxygen facilities in hopes of helping their sick beloved family members back home, while potentially getting themselves infected,” said Troy Maung, a founder of the Myanmar Doctors for Human Rights Network (MDHRN), who uses a pseudonym as with other anti-coup activists.

“A lot of doctors are still in hiding, and many clinics have closed because their staff fear being detained or having their equipment confiscated.”

Before the coup, Myanmar was one of south-east Asia’s first countries to begin vaccinating against Covid, using Oxford/AstraZeneca vaccines made by India’s Serum Institute.

But the toppling of Aung San Suu Kyi’s government disrupted efforts to contain the virus as doctors, nurses and other medical staff joined a civil disobedience movement to oppose the coup. The junta responded by arresting medical workers and raiding clinics set up to treat wounded protesters.

Coronavirus pandemic
Coronavirus tracked: has the epidemic peaked near you? | Free to read

At least 66 doctors, nurses and surgeons are in detention and seven have been killed since the coup, according to the Assistance Association for Political Prisoners, a human rights group.

Contact tracing, quarantine and treatment have “completely broken down”, according to the MDHRN.

Myanmar’s health ministry said this week that it expected half the population to be vaccinated this year, but opponents of the junta dismissed that target, saying the regime had no coherent or credible policy to contain the virus.

“The military junta is solely responsible for this national catastrophe,” said Win Myat Aye, minister for humanitarian affairs and disaster management under the National Unity Government, formed by MPs and others who fled into hiding or exile after the military seized power. “They showed extraordinary recklessness staging a coup in the middle of a pandemic.”

Tom Andrews, UN special rapporteur for human rights in Myanmar, said last week that a “perfect storm” of factors, including mistrust of the military, was fuelling the outbreak. He added that the country was “at grave risk of becoming a Covid-19 superspreader state”.

“The junta is unable to govern the country,” said Yanghee Lee, a former UN official and founder of the Special Advisory Council for Myanmar, an independent group of international experts. The organisation has called on the countries bordering Myanmar — Thailand, India, Bangladesh and China — to open their borders to aid corridors that could be channelled through areas controlled by ethnic groups that have battled the military for decades.

Myanmar
Coup and Covid pushing half of Myanmar below poverty line, warns UN 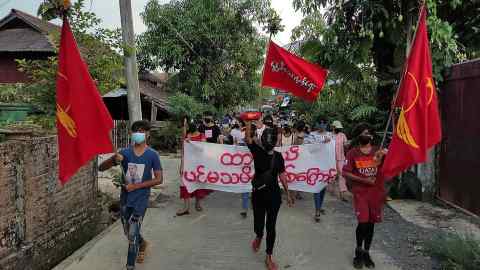 “The Delta variant has reached Insein (prison) and my husband has experienced cold and flu symptoms for a few weeks,” Ha Vu, Turnell’s wife, wrote in a Facebook post. “His health is at tremendous risk.”

Nyan Win, a senior official with the ousted National League for Democracy, died after contracting Covid in Insein prison.