Does the Netherlands’ role as an agricultural export powerhouse come at too high an environmental price?

Ruud Zanders is an unlikely candidate to be running a farm producing the world’s first carbon-neutral eggs.

In 2007 Mr Zanders ran a family-owned Dutch poultry business which at its peak had more than 120 employees, owned millions of chickens and operated in markets around the world. In the same year, a combination of bird flu and a looming financial crisis caused the company to go bust. He lost his home and was forced to rethink the principles of intensive farming and its impact on the environment.

Today he is the proud owner of Kipster, which he describes as “the most animal-friendly and environmentally-friendly poultry farm in the world”. It is a far cry from the export-dominated agricultural powerhouses — such as Mr Zanders’s former business — that the Netherlands is famed for.

Despite being the 32nd largest country in Europe by area — smaller than Ireland or Switzerland — the Netherlands is, according to the Dutch national statistics office, the world’s second largest food exporter by value after the US. This achievement has long been a source of national pride in a country that was ravaged by food shortages during the second world war.

Yet there are dissenting voices, and Mr Zanders’s is one of them. Along with a growing number of politicians and green activists, he is a vocal opponent of the intensive agricultural practices that have made the country an exporting giant.

Instead, he argues, Dutch farmers should dramatically reduce their livestock numbers and transform their business models to focus on sustainability rather than scale. “We have to change and get back to basics,” he says.

Such calls have acquired additional resonance during the coronavirus pandemic, with its dire consequences for the world economy. If sustainability entails a more locally focused farm sector, that chimes with protecting national food security.

Waste not, want not

Crucial to Mr Zanders’s green revolution is ditching the practice of feeding animals on high-quality grains from arable land, which Mr Zanders says should be used exclusively for human and not animal consumption.

“Seventy per cent of a farm’s carbon footprint depends on what you are feeding your animals,” he says. “We should be using our best land to feed people and not livestock.”

According to the UN’s Food and Agriculture Organization about three-quarters of poultry emissions come from feed production. Kipster’s 24,000 chickens are fed on a diet of 100 per cent waste food made up of Dutch staples such as stroopwafel (sweet waffles), biscuits and crackers.

Energy consumption also contributes to a farm’s output of greenhouse gases. Mr Zanders’ farm in the south-east of the Netherlands near Venray glitters with over 1,000 solar panels that provide all the energy it needs.

So far there are few signs that his fellow poultry farmers will follow suit. There are currently more than 1,000 poultry farms in the Netherlands, which together produce 10bn eggs a year. But Kipster is the only one that claims to be truly carbon-neutral.

Meanwhile livestock farmers are sensitive to any suggestion that they should reduce their herds. The issue has risen up the political agenda in recent years because of concerns over nitrogen emissions, including ammonia, which is produced by cattle.

Ammonia has harmful effects on soil, water and biodiversity, and also reacts to form nitrous oxide, a greenhouse gas. (Cattle also contribute more directly to greenhouse gas emissions by burping methane as they digest their food.)

Unlike many other countries in the EU, the Netherlands has introduced a strict legal cap on its nitrogen emissions. In May 2019, it breached this limit, forcing the government to stop construction projects and cut the motorway speed limit to curb emissions.

When a politician belonging to the ruling coalition argued in September that halving the country’s livestock population would help solve the problem, farmers were outraged. Mass protests ensued, with farmers regularly descending on The Hague in their tractors to proclaim their opposition to what they saw as scapegoating.

Wouter Beukeboom, a dairy farmer who has trialled ways to reduce his ammonia output, was among those taking to his tractor. “We are an exporting country,” he says. His farm mainly exports milk powder to Asia and Africa — markets where “there is strong demand for Dutch milk because people don’t have a lot of faith in their own farmers”, he says.

In a bid to quell farmers’ anger, Dutch agriculture minister Carola Schouten has insisted that there will be no halving of the country’s livestock population on her watch. Yet she is also an advocate for more sustainable farming practices, and would like the sector to adopt a “circular” approach by using waste products as animal feed.

“Over the past decades the Netherlands has gained a reputation as a highly innovative agricultural producer,” Ms Schouten says. “The future of farming requires innovation again and adopting a new approach.”

Some are facing the challenge with relish. Bennie van der Fels, a specialist in animal welfare at Wageningen University, has helped a group of a dozen Dutch dairy farmers, including Mr Beukeboom, devise methods to cut ammonia emissions. At their simplest, techniques include dousing cattle manure with water — a method that can reduce emissions by 40-60 per cent.

However, Mr van der Fels is realistic about what can be achieved. “Ammonia will always be produced so we have to try and find ways to reduce emissions rather than eliminate them,” he warns. “You can never have an emissions-free cow.” 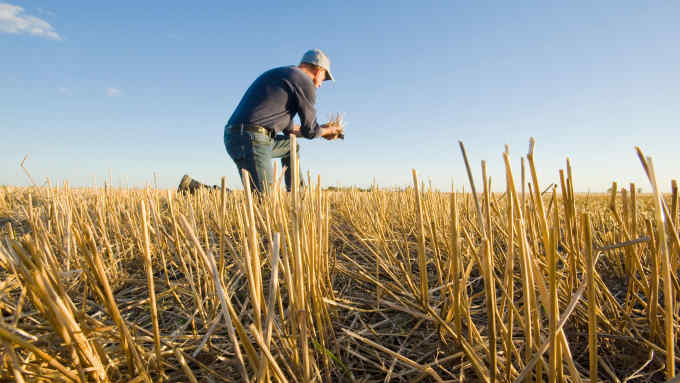