Start a 4-week trial
How To Spend It  Travel

‘England’s biggest natural playground’: the eternal appeal of the Lakes

The morning sun rises slowly over the slope of the fells, spotlighting the craggy surface blanketed in frosted bracken. Clouds fill the cavernous sky, grumbling above a mountain, turning the curves of green into a hue of hard granite. Westwards, a patch of steely blue offers promise. My peripheral vision struggles to absorb it all. This is the expanse to which I opened my curtains this morning and that I am now surveying, tentatively, from a paddleboard – a five-inch-thick piece of foam that is all that stands between me and the icy 200ft depths of Ullswater in the Lake District, in northern England. Later this day, wearing a thick winter wetsuit, I will hurl myself off a rock face and plunge into these biting waters, which plummet to 3C in December yet remain a year-round draw. I will also kick back, gripping a glow-in-the-dark floatation aid, to look at the stars, losing myself in the vast Stygian night as my breath plumes in the air. The moon will look fake. Alone, submerged, I’ll feel like the only person on earth.

It’s no surprise this place draws 19m visitors each year. The undulating landscape of England’s biggest natural playground has long attracted those wanting to bask in clean air and broad skies. Home to both England’s highest mountain and its deepest lake, the district was beloved by Beatrix Potter, mythologised by Wordsworth and mapped by Wainwright; walkers today come to test themselves on his 214 peaks.

Cumbria has, historically, attracted both low-key campsite crowds and spa mavens, the latter to its cosy country-house hotels. But recently, a clutch of design-focused residences has sprung up, from boutique lakeside haunts to Scandinavian-style boathouses. There’s a wealth of adventures to be had, from llama trekking and yachting to crossing a wire infinity bridge that spans the Honister Valley (nothing shreds the county’s sleepy associations quite like wobbling above a drop nearly twice the height of the Shard in London). Foodies flock to the buzzy gastropub and Michelin scene, mopping up Asian fare at HRiSHi in Windermere, or farm-to-fork food at Simon Rogan’s L’Enclume and the newish Henrock. Predictably, this year, as the pandemic prohibited urbanites from long-haul travel, tourist numbers have rocketed.

Not that you’d know it on the shores of Ullswater, a nine-mile-long lake just 20 minutes’ drive from Penrith, a small market town on the London-Glasgow train line. During a three-hour paddleboarding session with Adrian Bacon, a former British windsurfing champion who has sailed the Atlantic, I share the lake with just one small boat, a couple of canoers and a big brown cormorant, which swoops out of nowhere, skimming the water in search of breakfast.

“It’s so unspoiled here, it’s basically in its raw state,” says Will Ashworth, who opened the 40-room boutique hotel Another Place with his wife, Pix, in 2017. Ashworth renovated the former country house, expanding its appeal to a younger crowd with antique furniture and earth-hued walls. Nestled on the shore, with its own lakefront jetty and wood hut, it can basically claim public waters as its own pool; in summer, swimmers amble through a bank of wildflowers to reach the water’s edge. Today, the chilled grass crunches underfoot; thankfully, Another Place has crackling fires, a cracking wine list and a spa.

The Ashworths are used to living among the elements; they run the beachfront hotel Watergate Bay in Cornwall and regularly holiday in the Alps. “But the Lake District is more calming than either,” says Pix. “Things are slower. You have the time to notice the light and the change in seasons.” In a bid to put guests even closer to nature, they’re thinking of building glass huts in the grounds.

Matt Le Voi, the 31-year-old founder of Lakeland Mountain Guides, shepherds keen walkers up the Cumbrian fells four to six days a week, year-round. “The mountains are my office, but many of my clients work in corporate jobs and they find the landscape invigorating,” he says. Having moved to Cumbria nine years ago, he knows these lands like the back of his hand, often favouring less trodden paths to avoid tourist crowds. “Sitting at the top of Scafell Pike, when all you can see are just hills on hills on hills – it humbles you and it’s hard to feel stressed.” The Lake District, he says, “just gets under your skin”.

It’s easy to find seclusion in Cumbria. Pockets of civilisation are connected by twisting country roads, flanked only by fields. Phone reception is often better atop a mountain than in the village below it. Some chic holiday cottages – the Grade II-listed Parkamoor on Dodgson Wood farm in Ulverston, for instance – are so rural they don’t even have a postcode, let alone WiFi. Others, such as the boathouse at the Lingholm Estate, which hovers above Derwentwater, boast panoramic windows that overlook the hilly expanses.

But there’s an earthiness to the locals that ensures visitors don’t stay solitary for long. “It’s such a cliché, but everyone is so friendly and charming here away from the metropolis,” says Jeremy Langmead, former editor-in-chief of Mr Porter, who moved to a small farm in the South Lakes last November. Langmead believes the collective down-to-earth character filters into hospitality; he touts Lake Road Kitchen, helmed by a former Noma chef who plates up local beef and Saddleback pork, as an example: “It’s just delicious food in a convivial setting.” Age-old pubs with low ceilings, blanket-strewn armchairs and locally sourced menus are a respite from the unpredictable weather. “Cumbria is a hotbed of incredible ingredients,” says Simon Rogan, whose vegetables and herbs come from his 12-acre Cartmel farm; his guinea fowl is from a local supplier, Cartmel Valley Game, in the nearby town. “The climate is cooler, so things grow more slowly and are more flavoursome.” Hotels and other local businesses often partner to offer unique experiences: a llama herd based at Littletown Farm in the Newlands valley will next year be part of an overnight trek to Honister slate mine, where guests can stay in a luxurious military-style tent and a chef will rustle up dinner – all at 2,000ft.

In general, there’s a tangible sense of community here. Perhaps owing to its relative isolation in this most north-westerly part of England; perhaps because locals are used to sitting behind tractors or communing with flocks of sheep trotting between fields – the Cumbrian equivalent of a traffic jam. Perhaps, too, it’s because a third of the county is a National Park; in a way, it’s the nation’s still-wild back garden. On cloudless summer days, the views feel as if they extend forever as the sun sucks every bit of landscape from the shadows; in autumn and winter, that same scene offers a sense of enveloping shelter as the hues of the fells turn murky under darkening skies. And, coronavirus restrictions permitting, this ancient, ever-changing landscape is for everyone. “That sense of openness is a real draw,” says Maria Benjamin, who co-runs Parkamoor cottage. “It feels like it’s here to be shared.”

How To Spend It
Spots of time: Wordsworth meets the world’s best cookout 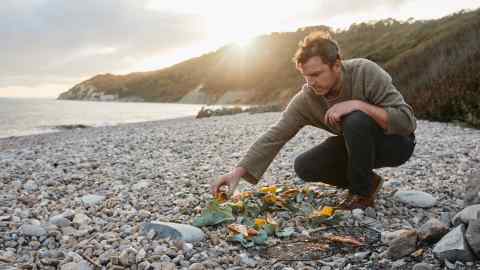 Which is why, I learn, very few locals ever leave these lands. As he glides across the glassy surface of Ullswater next to me, Bacon tells me he has sailed the world – but never thought of straying permanently from his native Keswick. “Why would I ever want to?” he says. “My commute to work is 20 minutes downstream on a paddle-board. Could it really get better than this?” As I struggle to maintain my balance and admire the mountains at the same time, I’m hard pressed to disagree.

With 12 self-catering cottages and apartments, this Keswick estate offers seclusion and indulgence. Explore the gardens, eat lunch in the restaurant or stay in the boathouse – one of the only residences on Derwentwater. thelingholmestate.co.uk; from £450

A restaurant with 11 guest rooms and an on-site brewery, situated in handy proximity to Windermere and Grasmere. drunkenduckinn.co.uk; from £125

One of the most remote cottages in the UK, Parkamoor was built by monks in the 13th century. Rustic, antique-filled and perched atop a fell with views over Coniston Water, it’s one for those truly wanting to escape. dodgsonwood.co.uk; from £95

A 16th-century, dog-friendly pub that updates British pub fare. The hand-raised pork pie comes with Stilton and pear salad; the cod, with chickpeas and chorizo. It’s well away from the hubbub. masonsarmsstrawberry bank.co.uk; dinner for two, from £48

The Keswick address for a good cut of local rib-eye, served with accompaniments such as Asian-style coleslaw with sesame, served in a Danish-inspired interior. innonthesquare.co.uk; dinner for two, about £65

Simon Rogan’s newest outpost opened in 2019 in a secluded spot in Windermere. You can enjoy a glass of his sparkling English rosé on the terrace before sampling his Asian-inflected British cuisine — think hake with curried cauliflower. henrock.co.uk; dinner for two, from £130

A gentler walk than some of the Lakeland fells, but the views are equally rewarding. From the top, you see the barrel of the Buttermere valley: two lakes surrounded by steep mountains.

This family-run firm in the Whicham Valley offers treks on Clydesdale, Shire and Ardennes horses. Canter across farms or fells, or gallop across Irish Sea beaches. cumbrianheavyhorses.com; from £75 for a 90-minute farm ride

Mountaineer around the fells at the UK’s last working slate mine. The Via Ferrata Xtreme climb, complete with “infinity bridge”, is not for the faint-hearted but the views are extraordinary. honister.com; £45

At Another Place, on Ullswater. ullswaterpaddleboarding.co.uk; £30 a session