A growing number of companies are joining Tesla in the sky-high valuation club, dividing Wall Street between those warning of a “bubble” and those questioning traditional assumptions about how best to value a business.

Tesla was a red-hot stock even before the coronavirus crisis, boasting a forward price/earnings ratio — a common measure of the value the market puts on a business’s future profits — of 75 times at the start of 2020. That was the highest of any company worth more than $50bn, according to Bloomberg data.

But now that stocks have hit new record highs, and share prices and profits become increasingly detached, 29 big companies trade on even higher earnings multiples. Tesla itself has moved to 209 times expected earnings.

“Nobody cares if you’re profitable these days,” said the European-based head of one large hedge fund, adding: “Who are you, Graham and Dodd?” Benjamin Graham and David Dodd were pioneers in using P/E ratios to find stocks undervalued by the wider market.

Other analysts argue that the run-up in valuations is yet another unsettling parallel to the dotcom boom and bust two decades ago. Once again, retail investors are stoking the gains for much-hyped “new economy” stocks. And alternative metrics such as price/sales, revenue growth or even operating expenses are being brought to the fore as better indicators of a company’s prospects.

“This investment is conventionally treated as cost, but in reality, they are getting exceptional returns on these investments,” he added. “Price/earnings and free cash flow metrics penalise companies for doing exactly what they should be doing”.

Such arguments are reminiscent of those put forward during the height of the dotcom mania. Some investors used new indicators such as eyeballs — the number of page views websites attracted — to justify prices. Many recommendations based on these alternative metrics proved ill-fated, with a number of tech stocks joining the so-called “99 per cent” club, measuring how far they eventually fell from their peak.

Today, valuations have been driven up across the tech sector, partly reflecting the benefits of Covid-19 lockdowns for companies serving those working and consuming from home. Stocks such as Tesla, up 964 per cent since the start of 2020, Twilio, up 277 per cent, and ecommerce firm Pinduoduo, up 363 per cent, have helped funds such as Boston-based Whale Rock Capital, Coatue Management and Baillie Gifford post huge gains.

The lagging P/E multiple, which compares stock prices to earnings over the past 12 months, for the tech-heavy Nasdaq 100 index has reached almost 40 times, a level not touched since the aftermath of the dotcom boom, according to FactSet data.

Tech bulls argue that things are different to the dotcom days. The digital shifts under way in areas such as retail, healthcare, transportation and cyber security — and accelerated by the pandemic — justify the valuations, they say.

Robin Brown, managing director at US investment bank Stephens, who focuses on tech and worked at Cable & Wireless and WorldCom during the dotcom boom, points to greater investor understanding of the companies and industries they are betting on.

A big support for the latest tech-led rally, and one that analysts do not think is going anywhere, comes from ultra-low interest rates. In a discounted cash flow model, a traditional way of valuing a company based on expected future income, a lower rate of interest gives a higher value to future cash flows, supporting current high valuations.

The main US policy rate, which was 5.75 per cent when the Nasdaq hit its then-peak in March 2000, is near zero and set to stay there for some time.

James Paulsen, chief investment strategist at The Leuthold Group, cuts to the heart of this dichotomy: P/E multiples on stocks “advise extreme caution”, but when adjusted for historically low bond yields they demonstrate an “extraordinary opportunity!”

“Every ladder is leaning against the same wall — interest rates and quantitative easing,” said Plaisance’s Mr Kozlowski. “If interest rates rise, there will be a real reckoning.”

For many, the growing dominance of Big Tech, and the “fear of missing out” on the wider sector rally, is enough to press on.

Those who have avoided the sector have passed up the chance of “the best investment opportunities in history” over the past 20 years, according to Mr Frazis. “The real lesson of the dotcom bubble was to stay invested in tech,” he said.

Explore the series
READ MORE
Learning from market bubbles past 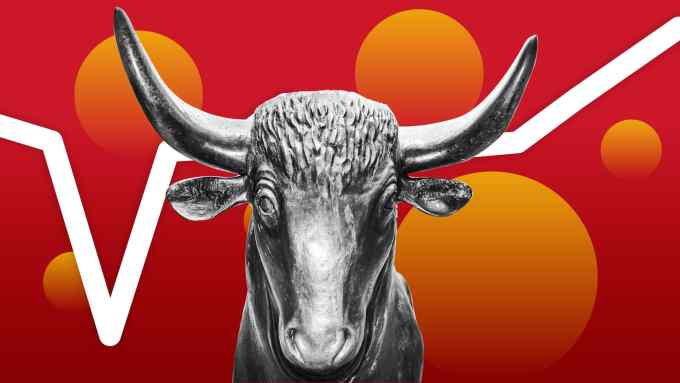