‘Men aspire to that quintessential male image. If a superstar is comfortable wearing a brooch they are too’

In 1928, the Maharaja of Patiala walked into Boucheron in Paris with his servants carrying six boxes of precious gems, including 7,571 diamonds and 1,432 emeralds. He then placed what is still one of the most extraordinary orders in the history of Place Vendôme.

The result was 149 designs that included sarpechs (turban ornaments), necklaces, bracelets and arm jewels, with about 40 pieces created to be worn by the maharaja himself.

Nearly a century on, Boucheron is again seeing more men buy its most precious creations — although not quite on the same scale as the maharaja. “I think that, today, [men] feel more confident in their own style to take risks and try new things such as wearing jewellery to show who they really are as a person,” says Claire Choisne, creative director of Boucheron.

This increased interest from men is reflected in the wider market for high and fine jewellery, too, and this has prompted brands to adapt.

Suzanne Kalan’s first men’s collection for her eponymous Los Angeles-based brand will launch on Mr Porter, the online fashion retailer, next week. The 10 designs include emerald green bangles, pink sapphire eternity bands and dog tags that feature black sapphires and white diamonds. “We noticed more and more rings being sold in larger sizes,” says Kalan. “We realised [it is] men buying so we thought we should really focus and get the line going.”

Hers will be the 13th fine jewellery brand added to Mr Porter in the past six months. Ten more jewellers are due to launch on the site by the end of the year.

“Men are wanting to make an impact and impression with their jewellery, buying multicoloured stones, diamond, and black gold pieces,” he says.

A chunky gold bracelet with pavéed pink and blue sapphires, rubies, garnets and citrines by Shay, a Californian brand, sold out as soon as it debuted on the site in July.

Tiffany & Co launched its first diamond engagement ring designs for men with the Charles Tiffany setting, named after its founder, in May.

Kalan says it was “an automatic reaction” to launch a dedicated range for men but that most of her collection is “genderless”. Many jewellers are choosing to promote genderless design, with Messika, the French diamond brand, revealing its first unisex collection in April. 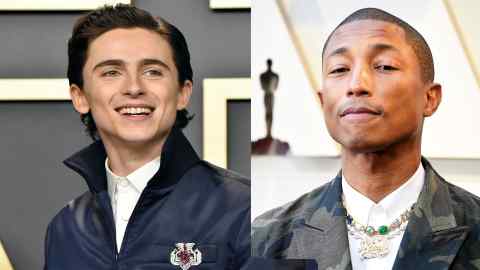 Last year’s Contemplation line by Boucheron was its first high jewellery collection that Choisne planned as a “genderless campaign” and which used a male model.

This year’s Histoire de Style, Art Déco offering — inspired by archive Boucheron designs — marked the first time that she used images of men during the sketching process for a high jewellery collection. Half the pieces were worn by men in the campaign shoot and video, and Choisne hopes this will continue.

Original art deco brooches are popular with men at auction for their simplicity and because they are “angular and geometric”, suggests Frank Everett, sales director for jewellery at Sotheby’s and a brooch collector in his own right. A Cartier diamond and onyx brooch, dated 1925, sold for $27,720 in June, nearly four times its high estimate, to a man aged under 40, a new collector of art deco lapel pins.

Sotheby’s has recorded an 80 per cent increase in male buyers at its jewellery auctions in the space of five years. Men accounted for 37 per cent of buyers and women 31 per cent (the remainder were companies, museums and institutions).

Everett says there has been a rise in men buying for themselves, particularly brooches, which are now a more common sight on men on the red carpet. American actor Jason Momoa, who portrays the superhero Aquaman on the big screen, wore a Cartier brooch including onyx, diamond and emerald on his lapel for the Golden Globes last year. “If you see a guy . . . that’s really a superstar in that quintessential male image, men aspire to that and so, if he’s comfortable wearing a brooch, they are, too,” Everett says.

London designer Shaun Leane feels that men who collect jewellery have become “much more daring” — his bespoke designs for these clients increased by 50 per cent in two years.

Juan Yarur Torres, a Chilean art collector and president of Fundación AMA, a Santiago non-profit art organisation, has commissioned pieces from Leane including a fuchsia brooch, an aquamarine shard necklace and a rose thorn arm vine. His latest request is jewellery for his leg. “I want something less obvious,” he says. Wearing jewellery brings him “happiness”; the pieces are beautiful and have stories behind them. “It’s something about power also,” says Torres. “Let’s be honest, if you have a huge stone it means something.”

Men’s interest in wearing jewellery is a “resurgence” of a trend that goes back hundreds of years, says Everett.

Choisne, though, will not be dictated to by trends. Her designs are “beyond gender”, she says. “It’s really about character, personality and aspiration.”

Get alerts on Fashion accessories when a new story is published